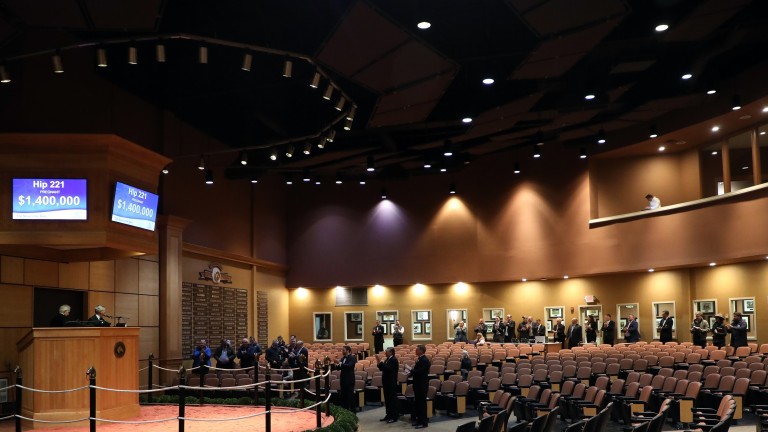 Auctioneer Terence Collier, from Kent, receives a standing ovation in the Fasig-Tipton sale ring in Kentucky after hammering down his final sale for $1.4 million
Fasig-Tipton Photo
1 of 1
By Michele MacDonald 11:02AM, NOV 6 2019

A standing ovation following the sale of a $1.4 million mare at Fasig-Tipton’s November auction on Tuesday officially closed the career of one of the most well-known auctioneering personalities in the thoroughbred world.

Terence Collier, a native of Cobham, Kent, who served as the voice of Fasig-Tipton’s biggest sales while introducing horses as they entered the ring, made the surprise announcement that, after 43 years atop the podium, he would not be involved with any more auctions.

Collier had just directed the sale of nine-year-old Transplendid, a daughter of Elusive Quality and dam of promising juvenile graded stakes winner Dennis’ Moment, to a group affiliated with Coolmore. The mare was in foal to More Than Ready and offered by Ballysax Bloodstock on behalf of Brandi and Geoff Nixon’s Grantley Acres.

“What a pleasure it is to sell my last horse from the stand to some of my oldest friends in the business,” Collier reflected as virtually everyone in the sale pavilion rose to applaud.

Fasig-Tipton president Boyd Browning jnr, his voice choked with emotion, told reporters a few moments later that “it was Terence’s last night” at a sale, although his actual retirement from the company may not come until the end of the year.

“He’s been a big part of the team," said Browning. "It was cool that he went out literally on top, selling a horse from the stand for $1.4 million to some of his great friends. He’s been a great liaison with the Coolmore group for a long time. There’s a lot of trust and confidence [between them]. We’ll miss him.

“But, as we’ve said in the past, the core and the fabric remains the same. Lots of people contribute and others will pick up the baton. You don’t replace Terence. But we’ve got some really capable, bright and excited people to be part of the team.” 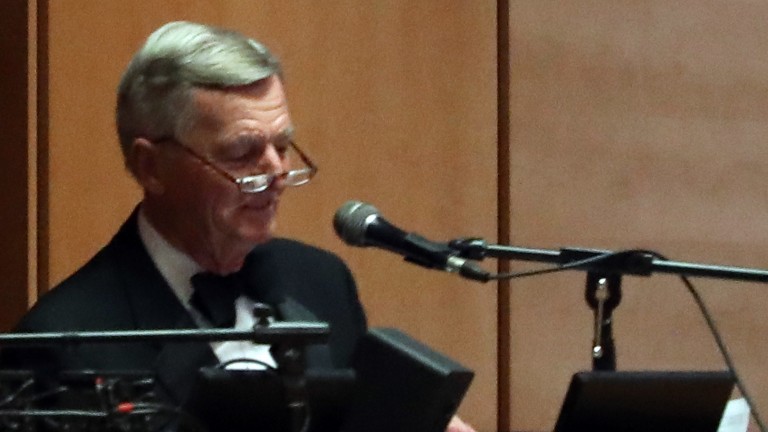 Asked how much Collier would be missed, Browning replied: “Believe me when I say we’ve been through the highs and the lows. We’ve seen it all - well, you don’t ever say you’ve seen it all in this business, that’s for dang sure, but we’ve seen a lot.

“He’s reached the point where he deserves to go do whatever the hell he wants to do and not have to worry about getting on a plane to go to the next sale or listen to one of us rant about, ‘Why didn’t you make that announcement?'”

Leading the applause for Collier was a huge contingent from Coolmore, including MV Magnier and Ashford Stud staffers Aisling Duignan and Charlie O’Connor, as well as long-time Coolmore associate Paul Shanahan. Reiley McDonald of Eaton Bloodstock sat with the group and signed the ticket for Transplendid with the name Sugar Valley Farm.

Collier had urged bidders to think about how Transplendid’s son Dennis’ Moment "could be anything", adding: "He tripped out of the box [in the Breeders’ Cup Juvenile] and we were all expecting him to win that race”.

Coolmore had to turn back Jane Lyon of Summer Wind Farm to prevail on the mare and thus provide a poignant angle to Collier’s swansong.

A former member of the Merchant Navy who said he “called the Bingo numbers on the Queen Mary,” Collier got his start in the thoroughbred business when his future wife, Elizabeth, suggested he get a job on a stud farm.

He went to work for Michael Oswald at Lordship Stud in Newmarket prior to Oswald becoming the Queen’s stud manager, and Collier has called Oswald his mentor.

Following a stint as what he called a “tea boy” with the British Bloodstock Agency, Collier arrived “penniless and with sort of a little cardboard suitcase” in New York in December 1976 to begin work with Fasig-Tipton.

Over the following years he gained worldwide connections by recruiting buyers and horses to sales conducted by North America’s oldest thoroughbred auction house and his travels took him around the globe.

“I’ve had a wonderful career, it’s afforded me some great heights,” he said in a presentation to the 2018 Equestricon convention in Kentucky. “I am eternally grateful to all of the people who have helped put me there.”

Other tales from the Fasig-Tipton auction on Tuesday...