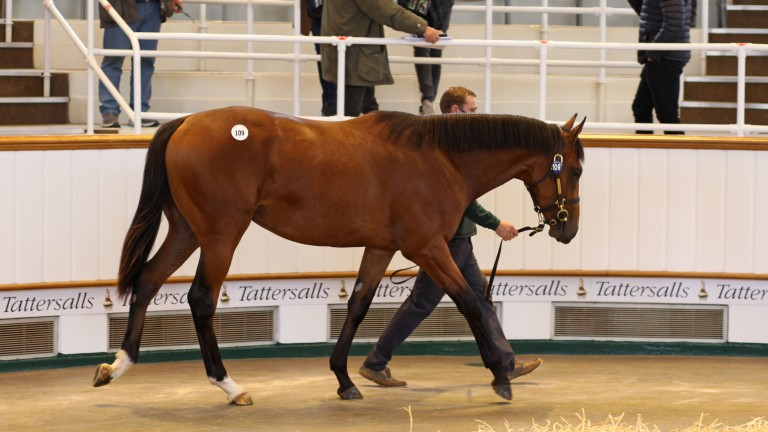 It’s a typically busy summer Friday across Britain and Ireland, but one race definitely worth not forgetting about is the 7f maiden at Newmarket (6.08), for it features the debut of Godolphin’s Hafit, who set them back the small matter of 2,100,000gns at Tattersalls October Book 1 last year.

Bred in partnership by Floors Farming and Coolmore, the latter were outgunned in the ring on that occasion by Godolphin, who wanted the son of their flagship sire Dubawi and were in no mood not to get him.

"He moves incredibly well and comes from a very good stud. Collectively we really liked him. It just shows you, when a nice horse comes into the ring, there are still people there for these collectors' items."

He added: "It's so sad that Guy Roxburghe isn't here as he was a wonderful breeder, a good friend and a great enthusiast."

The juvenile is out of the Grade 3-placed Galileo mare Cushion, in turn out of the mighty Attraction. He is the second foal produced by Cushion, the first, Bright Idea, also bred in partnership by Floors Farming and Coolmore, won at Killarney a few months back for Joseph O'Brien and Michael Tabor.

Expectations will be much higher for Hafit given his price tag, and plenty should be learned on Friday evening as the deep Newmarket maiden contains ten other newcomers, many of whom also catch the eye.

Lael Stables’ homebred son of Siyouni, Just Wonder, is among them, as are Shadwell homebred Laasudood and Qatar Racing’s Millennial Moon, another by Dubawi and the first foal out of Group 3 Prix Chloe winner Wekeela, who also won at the same level at Monmouth Park and was a three-time runner-up in top-level contests either side of the Atlantic.

Razzle Dazzle, Sheikh Mohammed Obaid’s homebred, is another who could go well on his debut, while Marc Chan’s Thanks Monica is one of two fillies in the contest receiving 5lb. All in all, it’s one to set the alarm for.

The Newmarket card is one that all those connected with the late Duke of Roxburghe’s breeding operation will be keeping close tabs on, for the opening 6f novice stakes (5.05) features the debut of Joking - out of Comic - in the silks of Floors Stud.

The two-year-old daughter of Time Test was bred by Floors Farming in partnership with the Duke of Devonshire and she is a half-sister to none other than Hong Kong legend Viva Pataca, whose 16 victories contained just the eight Group 1s at Sha Tin.

Comic also produced Laughing, who went on to be a dual Grade 1 winner in the US.

Joking is trained by Hugo Palmer and is set to face half a dozen rivals in what looks a tight and intriguing little affair.

FIRST PUBLISHED 1:16PM, AUG 5 2021
The Newmarket card is one that all those connected with the late Duke of Roxburghe’s breeding operation will be keeping close tabs on