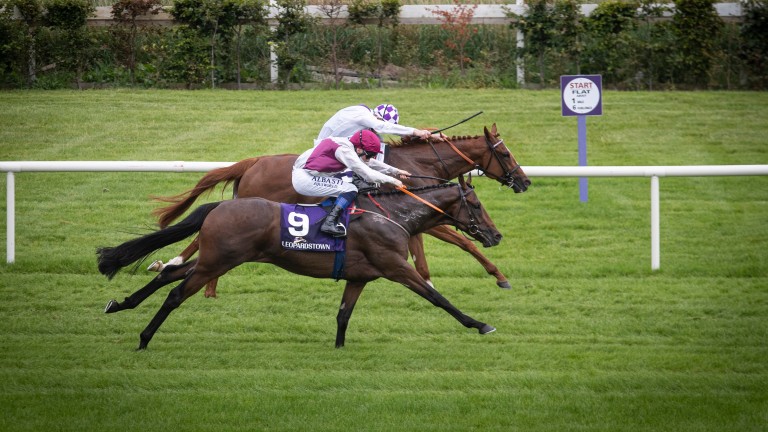 Thursday's racing at Leopardstown will live long in the memory not so much for the stakes action on the card, but rather the 300-1 upset caused by He Knows No Fear, who became the biggest-priced winner since records began when landing the mile maiden.

But were there any clues in the pedigree of the winner, whose only previous outing was a down-the-field run at Limerick over the same trip, to suggest he might have fared better on Thursday?

He Knows No Fear is campaigned by his owner-breeder-trainer Luke Comer, who sourced his dam Tripudium for €5,000 from Geraldine Ryan of Moyfinn Stud at the 2015 Goffs February Mixed Sale.

Tripudium, a daughter of the Northern Dancer stallion Night Shift, won three times in Italy and has produced three winners to date from six runners.

Arguably the biggest clue, though, comes from He Knows No Fear's less-heralded sire Mourayan, a son of Alhaarth bred and raced in the earlier part of his career by the Aga Khan.

Trained by John Oxx, he won twice as a juvenile at Leopardstown, first in a mile maiden and then the Listed Eyrefield Stakes, and finished third to Fame And Glory in the Irish St Leger the following year.

His efforts booked him a flight to Australia, where he was trained by Robert Hickmott for a partnership headed up by Lloyd Williams, the most successful owner in the history of the Melbourne Cup.

Mourayan excelled down under, particularly at Randwick, where he struck in the Group 1 Sydney Cup Handicap over two miles in 2013, and he was later exported back to Ireland amid little fanfare in early 2015.

Since then Comer and his family have bred exclusively from Mourayan, with He Knows No Fear his only runner to date, though more of the sire's progeny can be expected to appear down the line as he has 25 known offspring of racing age.

Comer revealed that He Knows No Fear is one of three horses he has in training named after the movie character Johnny English, with the other two being He Knows No Danger and He Knows Nothing.

"He Knows No Fear is a nice horse," said Comer. "The first race, you couldn't go by, because he got left in the stalls. I think Mourayan is not a bad sire at all - he finished behind Green Room in the Melbourne Cup. We also stand Green Room, who would have covered more mares than him, but we might use Mourayan a little bit more now with He Knows No Fear.

"This is his only runner and his only winner, so hopefully he'll get a few more now, and it was a nice win."

Comer also trained Raa Atoll, the winner of last year's Group 2 Oleander Rennen, as well as the 2010 Gladness Stakes scorer Kargali and the 2001 Curragh Cup winner Chimes At Midnight. He Knows No Fear was partnered by Classic-winning jockey Chris Hayes.

Meanwhile, his groom wore a particularly appropriate mask given the occasion, which sported a Darren Birdie illustration of a horse and a caption which read: "Why the long face?" 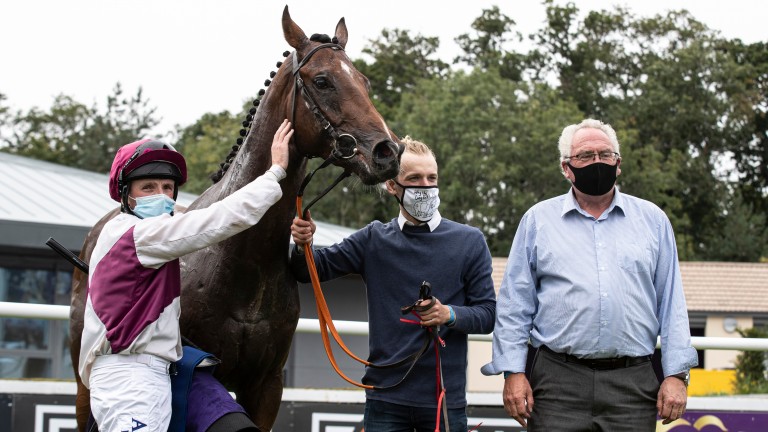 Why the long face? Connections of 300-1 shock scorer He Knows No Fear in the winner's enclosure
Patrick McCann