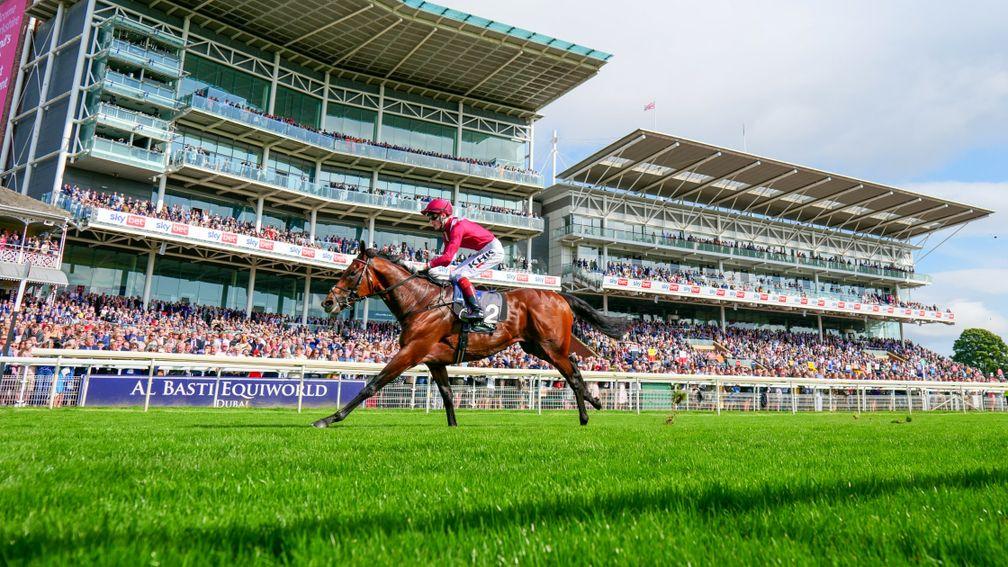 Out on his own - Mishriff won the Group 1 Juddmonte International by six lengths in 2021Credit: Mark Cranham (racingpost.com/photos)

Mishriff has recovered well from the minor injury reported at the start of the month and remains on course to take up his first season's covering duties in mid-March at Sumbe's Haras de Montfort et Preaux in Normandy.

Mishriff was in heavy demand on the opening day of the Route des Etalons stallion trail, with the stud management happy to show the son of Make Believe to breeders and media alike inside his spacious box.

When the issue was first reported on January 3, the prognosis was for only a minor delay to stud duties while the multi-millionaire winner of three international Group 1s - as well as the richly endowed Saudi Cup - took in some stall rest.

Sumbe's Mathieu Le Forestier said: "Everything is on schedule for him to start covering mares in mid-March.

"He has excellent tissue, which has aided his recovery, and everything has gone according to plan."

Sumbe report that the overwhelming majority of breeders planning to use Mishriff have been happy to wait on his recovery.

"Pretty much everyone has kept the faith and we have no worries on that score," said Le Forestier.

Among the mares set for a date with Mishriff is dual Group 3 winner Oscula, who the six-year-old's owner-breeder Prince Faisal purchased at Tattersalls in December for 1,000,000gns and who is already onsite in Normandy.

Mishriff, who will cover his first book at a fee of €20,000, is out of Prince Faisal's homebred Raven's Pass mare Contradict, whose third dam Rafha won the Prix de Diane in the famous maroon colours and went on to produce a pair of outstanding stallion sons in Invincible Spirit and Kodiac.

Some of the star stallions to see on Route des Etalons