Houldsworth and Sullivan work the oracle with sale coup 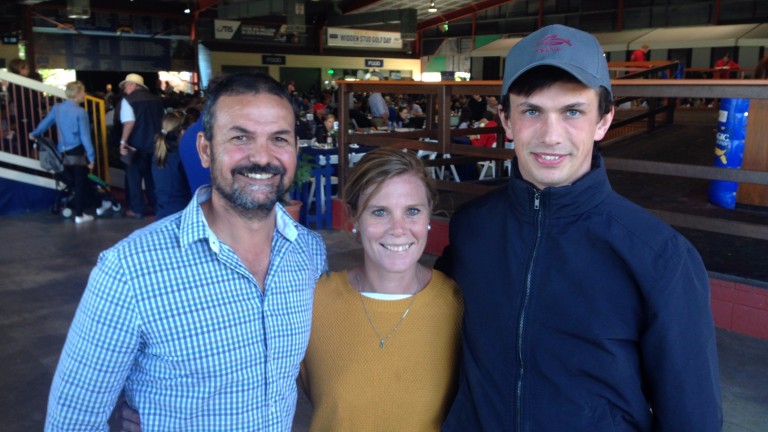 The winning team at Magic Millions: Sherah Sullivan (centre) with husband Mike (left) and Matt Houldsworth
Martin Stevens
1 of 1
By Martin Stevens on the Gold Coast 6:19AM, JUN 1 2017

Plenty of sledging goes on between England and Australia but when there is collaboration instead of contempt, great things can happen.

So it proved in the third session of the Magic Millions National Broodmare Sale on the Gold Coast on Thursday, when friends from different sides of the world united to turn a big profit on a mare.

Mission accomplished, Sullivan then sold Lady Oracle, in foal to popular Arrowfield Stud sire Not A Single Doubt, to Phoenix Thoroughbreds for A$400,000 (£230,000/€263,000) at Magic Millions.

It made a change for the mare to find herself in demand.

Darley-bred Lady Oracle made two starts for Andre Fabre and Godolphin in 2015, finishing a close third in a Saint-Cloud three-year-old maiden on her debut - behind only future Prix Saint-Alary heroine Queen's Jewel and Group 3 scorer Taniya and one place in front of subsequent Group 2 second Lady Of Kyushu.

Lady Oracle disappointed on her next start when a warm favourite, and two months later was discarded by Darley and sent to the Tattersalls July Sale, where she was bought by Armando Duarte for just 14,000gns.

She later joined Andreas Woehler and then Silke Brueggemann in Germany, where she managed another placing at Munich.

Lady Oracle was sent back to Tattersalls for the December Breeding-Stock Sale in 2015 among the draft of Ronald Rauscher and – here is where bloodstock agents should kick themselves – she was bought back by the vendor at 3,000gns.

Since then, several relatives to Lady Oracle – who is out of the Australian-bred Loup Sauvage mare Wild Queen, who won six stakes races in her native country and has a deep antipodean pedigree – began to shine.

Telperion, a grandson of Wild Queen, finished fourth in the Golden Slipper and second in the Inglis Sires' last year, while Regent, Lady Oracle's half-brother, has won two races and performed promisingly in Pattern company at two this season.

The icing on the cake was the incredibly impressive four-length victory of Telperion's two-year-old half-brother Kementari in a Randwick conditions stakes on the Saturday before Lady Oracle's appearance in the sales ring at Magic Millions.

Sullivan takes up the tale: “Matt's a good friend of mine - we became acquainted three years ago when he came over to Australia - and he put the idea into my head to buy a few Australian pedigrees out of Europe.

“He did the legwork over in Newmarket. The mare had been through a sale and was not sold but I'd been following Telperion closely, and watched him get into the Slipper and then go on to the Sires', so I sent Matt on a mission to find the mare in Germany and take a punt on her.

“She was still a bit weak and needed to fill out coming off the track, so we brought her home, fed her up and got her straight in foal. Everything has just fallen into place with the covering stallion and Kementari - it's been brilliant.”

Asked whether the sale represented a fair profit she replied: “Fair profit? It was a huge profit! I'm super rapt. I took the punt myself, and thought I'd back my own judgement.”

The result gilded the first visit to the National Broodmare Sale for Houldsworth, who also oversaw the private purchase of Up To You on behalf of YuLong Park, which sold the Giant's Causeway half-sister to George Strawbridge's top-class stayers Lucarno and Flying Officer to Rosemont Stud for A$460,000 (£265,000/€303,000) on Wednesday.

“Sherah has done an incredible job with the mare and all the credit really goes to her,” said Houldsworth, who has also been signing for lots on behalf of Australian clients this week. “They picked the right stallion, they got her looking fantastic and ready for this sale. I just couldn't be happier for her really. Hopefully there'll be a few more missions to come.”

Although Lady Oracle had a fine Australasian pedigree – her dam is also a half-sister to Group winners Cumbria and So Gorgeous, the latter also the mother of Golden Shaheen winner Sterling City – Houldsworth said it was the physical that was key to finding a mare who will be popular in the southern hemisphere.

“It's not easy finding them, you've got to be quite selective in the type of mare you bring here from Europe and there's a high attrition rate in Europe trying to find the right type,” he says. “But if you do buy the right one, there is such a strong middle and higher market in Australia that it can be lucrative.

“The type is most important. If you have a nice pedigree that's fine, but buyers aren't going to keep them on their lists if they're not a good type, and Lady Oracle luckily had both.”

The riches to rags, and back to riches, story of Lady Oracle may just inspire a few more people to try finding the right type to pull off another Euro-Australian coup.