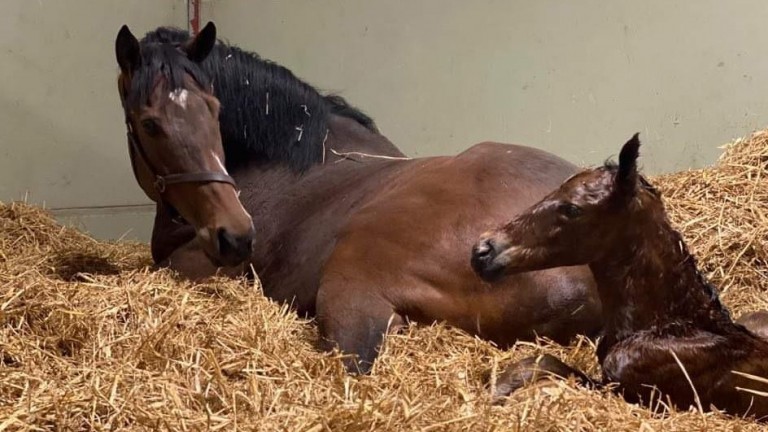 Laurens with her Invincible Spirit colt foal at just a few hours old
Salcey Forest Stud
1 of 1
By James Thomas 10:40AM, APR 6 2021

The new arrival was born at Daniel Creighton and Josh Schwartz's Salcey Forest Stud on Sunday night, and mother and foal are reportedly in rude health after a "textbook" foaling.

"The foal and the mare are both superb and we're very happy with both of them," said Creighton, who oversees Laurens and the other Dance Thoroughbreds broodmares at the Warwickshire farm.

"All went well and it was a pretty textbook foaling really. She was a fair bit overdue but, to be fair, things that take a while are normally worth waiting for and the foal she's had is incredible.

"He's a good size, has got fantastic bone, loads of quality, lovely big ears and her little white marking on his nose. He's a very above average first foal."

Creighton signed the £220,000 ticket when Dance bought Laurens at the 2016 Goffs UK Premier Yearling Sale. Sent into training with Karl Burke, she quickly made up into a high-class performer, winning three times during her juvenile campaign, most notably the Group 1 Fillies' Mile.

During a remarkable three-year-old season she cemented her status as a real fan favourite with victories in the Prix Saint-Alary, Prix de Diane, Matron Stakes, in which she famously saw off Alpha Centauri, and Sun Chariot Stakes, displaying not only masses of talent but also an abundance of toughness.

She returned at four to claim her sixth Group 1 prize, and eighth success overall, in the Prix Rothschild.

Her first foal will now begin his own gradual journey towards the racecourse, with Creighton saying the formative weeks and months are all about helping the new arrival build up his strength.

"They'll be introduced to the paddock with some managed turnout. The time they get out will be increased gradually until the foal is strong enough to cope with being out all the time, weather permitting," he said.

Laurens is scheduled to visit Kingman, arguably Invincible Spirit's most exciting sire son, for her next mating, with the daughter of Siyouni likely to head to Juddmonte's Banstead Manor Stud in Newmarket in around four weeks' time.

FIRST PUBLISHED 10:40AM, APR 6 2021
She was a fair bit overdue but, to be fair, things that take a while are normally worth waiting for