The new stallion who is Polish-born, obscurely bred ? and fully booked 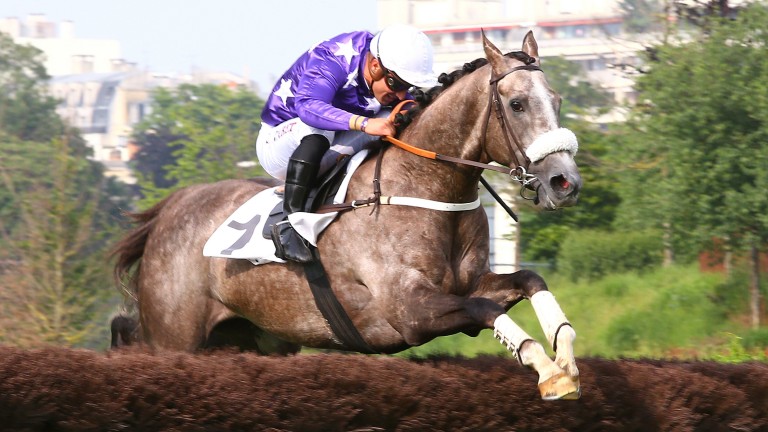 Try to picture a National Hunt stud in Britain or Ireland standing a Polish-bred son of Estejo – an Italian Group 1 winner by the equally obscure Johan Cruyff – out of a mare by the less than glamorous Llandaff. Then attempt to visualise breeders in those two countries piling enthusiastically into that stallion.

It is beyond the realms of imagination. But in France such a turn of events is unfolding as the breeding season gets under way.

Haras de Cercy's unusually bred new recruit Tunis, deliberately sought out as a source of untapped bloodlines, is already fully booked thanks to a loyal clientele of mare owners who were won over by his looks and the hope he may follow in the footsteps of former stud residents Network, Saddler Maker and Voix Du Nord.

“We were determined to find something new, some fresh blood, as we felt French jumps breeding was going around in circles with the likes of Martaline, Poliglote and Saint Des Saints – we are at the point of saturation with those sires,” says Cercy's Andree Cypres.

“So Tunis came along at just the right time for us, and as well as that really interesting pedigree he was a very talented runner with a good physique.”

Indeed, Tunis is far more than just a breeding curio. In 17 starts for Guillaume Macaire, the majority of which came in black-type hurdle events at Auteuil, he never finished out of the first four and won a Grade 2, two Grade 3s and a Listed contest, each time taking the scalp of his brilliant stablemate and regular rival Master Dino. He also finished runner-up in Grade 1s on three occasions.

Cypres also points out that despite being by the esoteric Estejo and from an enigmatic eastern European damline, the five-year-old is not an entirely exotic proposition.

“On the dam's side, it was a French pedigree going back to the 1930s before it was exported to Poland, and then it went to Germany around the second world war, before returning to Poland again,” she says.

“There is also the fact that Tunis's damsire Llandaff was by Lyphard – a Group 1 winner in France for Alec Head – out of the great racemare Dahlia, who of course was trained by Maurice Zilber.

“Llandaff stood for a while in Switzerland and then in Poland, and although he had very few runners in western Europe he did leave Vespone, a dual Group 1 winner in France, who in turn sired the Australian Group 1 winner Pornichet.”

Tunis was secured by Cercy during his break from racing last summer and when the co-operative of breeders behind the stud were emailed the offer of shares in the stallion prospect, they sold out within an hour and a half – leading to “lots of angry people”, according to Cypres. “But those who missed out on the shares took their nominations and that's why the horse is full.”

Among the more than 100 mares booked in are Bellissima De Mai, a daughter of Pistolet Bleu who is the dam of Ryanair Chase hero Dynaste, and Vita Will, a Dom Alco sibling to the high-class chasers My Will and Unioniste.

Cypres also gave an update on Tunis's studmate Cokoriko, a son of Robin Des Champs who last year broke the record for number of mares covered in a single season in France – with 234 – even when he had so few runners as his mainly jumps-bred first crop have only just turned four.

“I was studying a list of his four-year-olds and found at least 20 who have been exported to Britain or Ireland,” she says. “I think people in those countries will hear a lot more about him when those horses start to come out as the year progresses.

“When people ask me who our next Saddler Maker or Voix Du Nord will be I tell them Cokoriko and they say, really? They'll see!”

Cokoriko is also booked out for the coming breeding season and his concubines will include the dams of the following classy National Hunt performers:

Cokoriko will also cover Quiet Story, a half-sister to Buveur D'Air by Franc Bleu Argent, and Cabriole Mag, a Listed-winning hurdler who is a Gris De Gris half-sister to Vroum Vroum Mag.

Karaktar, a Group 3-winning son of High Chaparral, has already attracted a three-figure book this year and has been selected for Pour Le Meilleur, a daughter of Video Rock who is the dam of Paul Nicholls' popular chaser Black Corton, and Uddy, a Listed hurdle winner from the family of Nupsala and Ucello II.

Jeu St Eloi, a useful chaser by Saint Des Saints, also has more than 100 mares booked to him, while Free Port Lux and Elliptique, whose first foals arrived last year, are both also reported to be popular with local breeders.

Cypres went on to report that Fatima, the dam of legendary two-mile chaser Sprinter Sacre and a regular partner of Cercy stallions, has been retired from covering.

The daughter of Bayolidaan, now 26, produced a colt foal by Free Port Lux last year but he sadly died young. Her owner Christophe Masle has retained two of her daughters to breed from who will go either to Jeu St Eloi, Karaktar or Tunis.

It is worth noting with regard to Tunis's unorthodox breeding that Sprinter Sacre's sire Network might once have been considered something of an unknown quantity, as one of the first stallions outside of Germany by Monsun, whose paternal line going back through Konigsstuhl and Dschingis Khan had hitherto gained scant exposure elsewhere in Europe.

We know all about Monsun now, and Network eventually became one of Europe's pre-eminent jumps sires, fielding the likes of Acapella Bourgeois, Delta Work, Le Richebourg, Rubi Ball, Rubi Light and Saint Are in addition to Sprinter Sacre.

Moreover, Voix Du Nord, an outstanding source of jumps talent such as Defi Du Seuil, Kemboy and Vroum Vroum Mag who died aged only 12, was a dual Group 1 winner but he was a son of a stallion of little consequence in Valanour who in turn was by the disappointing Lomond.

The similarly ill-fated Saddler Maker, on the other hand, was beautifully bred as a son of Sadler's Wells out of an Alleged half-sister to Poliglote, but he failed to win in nine starts and showed little talent on the track, before going on to sire the likes of Apple's Jade and Bristol De Mai.

The lesson is, discard a Cercy stallion at your peril. Tunis might have an unfamiliar pedigree, but the compensating factors of his strong jumps form, the stud's faithful following of mare owners and the benefits of the French racing programme are very familiar indeed.

FIRST PUBLISHED 5:58PM, FEB 26 2019
When people ask me who our next Saddler Maker or Voix Du Nord will be I tell them Cokoriko and they say, really? They'll see!

Yulong break rivals' hearts at €1.2m for Siyouni's German Guineas winner Txope Sister to Group 1 winner Tofane sells to Yulong for NZ$460,000 on Gavelhouse Mendelssohn off the mark as Shaqra'a Sultan wins on debut in Saudi Arabia Class of 2022 make their mark on Irish National Stud course 'If Nathaniel was a soldier he'd be the first one to throw himself into battle' Study shows negative impact of inbreeding on number of foals who make racecourse