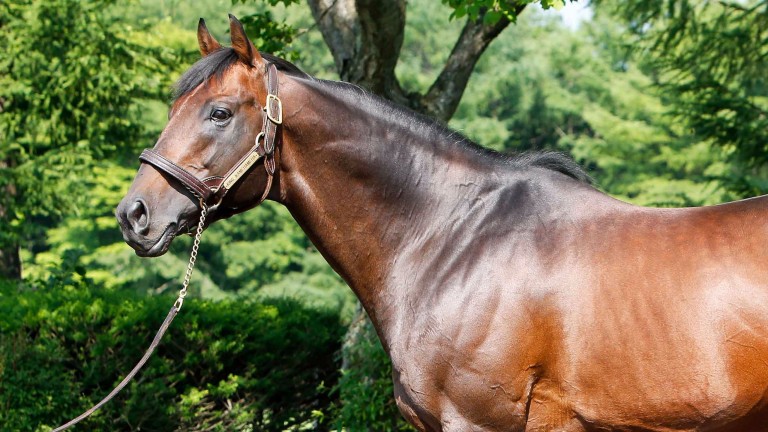 His immune system had been gradually worsening from the start of the year and he had been suffering from illness. Shadai Stallion Station announced that on Friday his body temperature rose dangerously and at about 10pm his condition deteriorated rapidly.

King Kamehameha was bred by Northern Farm out of the Last Tycoon mare Manfath, making him a half-brother to Santa Anita Derby winner The Deputy.

He made his racecourse debut in November 2003 and won the following year's Japanese Derby in 2.23.30 minutes, a record at the time. He was retired later that season due to superficial digital flexor tendonitis in his right lead leg, found after the winning the Grade 2 Kobe Shimbun Hai, his prep race for the Tenno Sho Autumn.

King Kamehameha's stallion career has been quite brilliant. He is the sire of 12 Group/Grade 1 winners, headed by the outstanding international sprinter Lord Kanaloa, who is off to a good start at stud himself, with Japan Cup heroine Almond Eye among his progeny.

However, connections had announced his retirement from the breeding shed last month due to his poor health.

His death comes just over a week after the passing of Japan's dominant sire Deep Impact, marking the close of a glorious chapter in the story of the country's thoroughbred breeding.

King Kamehameha's breeder Katsumi Yoshida of Northern Farm said: "I heard he passed at 5am. In the past five years his condition had improved and then got worse again. His sight was poor because of a cataract.

"Although two huge stars have gone, they have left successors for the next generation. King Kamehameha made a tremendous contribution not only to this farm but also to the Japanese racing scene. I would like to say thank you very much to him."

The horse's former trainer Kunihide Matsuda rushed to the stallion station after hearing of the death and said: "He was a horse who made my dreams come true. He became an excellent stallion who sired high-class horses from sprinters to long-distance horses, both for the dirt and the turf. He was simply great."

King Kamehameha's regular rider Katsumi Ando, now a racing commentator, said: "My favourite memory is winning the Japanese Derby with him. It was the one and only time that I rode in the Derby thinking that I was sure to win.

"He passed on his indomitable spirit to his progeny. His passing is very sad but his pedigree will become immortal."

King Kamehameha has sired 55 Group winners and 23 Listed winners in total, and his daughters have produced the likes of Grade 1 winners Blast Onepiece and Wagnerian.

Siskin shows the depth and quality of Juddmonte Farms breeding

FIRST PUBLISHED 2:54PM, AUG 10 2019
Although two huge stars have gone, they have left successors for the next generation