Sergei Prokofiev is the latest recruit to the stud's stallion roster 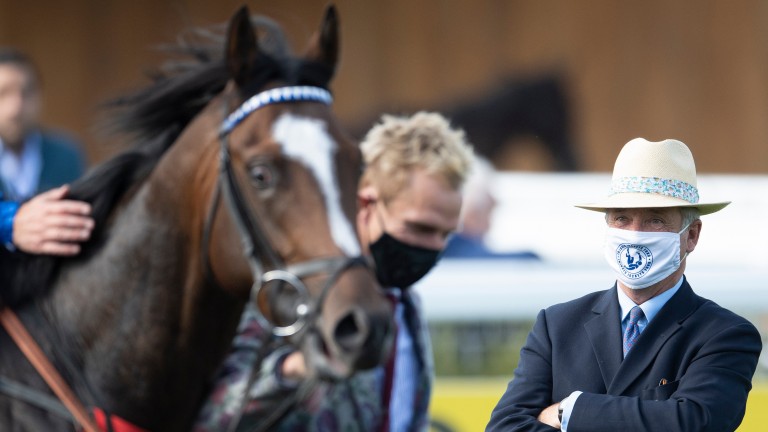 To say Whitsbury Manor Stud enjoyed a purple patch last week may even be underselling it.

First came the news that the classy Sergei Prokofiev is joining their stallion ranks, then came stalwart Jacques Prinsloo's Stud Employee of the Year award, which was followed by Alkumait's storming Mill Reef victory.

The son of Showcasing is very much a local hero given he was bred at Whitsbury and is trained down the road by Marcus Tregoning, who may have found a worthy replacement to the recently retired Sussex Stakes hero Mohaather.

Stud director Ed Harper said: "It's particularly special given Alkumait was bred at Whitsbury by our stallion. Conceived, foaled and trained within a mile, it couldn't get more homegrown.

"He was my favourite foal of that year. He was a spitting image of what I think Showcasing would have looked like."

Such was the impression Alkumait made upon the team as a foal, when he sold for 150,000gns at the Tattersalls December Sale, his dam, Suelita, returned to Showcasing the following year and produced a filly. She is catalogued as lot 469 at Tattersalls Book 1 next month.

"It's a big call to go back with a smart mare on the same mating straight away but he was that nice a foal we were keen to go back," explains Harper.

The colt's Group 2 success at Newbury was just one highlight of a fantastic few days for Whitsbury, and hopes are high for latest recruit Sergei Prokofiev, a son of the much-missed Scat Daddy.

"We don't stand stallions unless we 100 per cent believe in them, but even more so now with what the world's going through," said Harper.

"I look at the whole landscape of potential stallions constantly and he was top of my list ever since he was placed in the Coventry and then won the Cornwallis.

"For what we try to produce - the speedy, precocious horse - Scat Daddy is the holy grail. To get a good looking son of his that cost 1.1 million as a yearling and nearly won the Coventry against top-class opposition before an astonishing display in the Cornwallis, that's the sort of horse I love."

Harper also expressed delight over Prinsloo's Thoroughbred Breeders' Association award, saying: "It's a morale boost for the gang because Jacques is a very popular character, both here and around the sales. There are a lot of people out there who deserve recognition, but the fact he's got it is very popular within the whole village.

"He even had congratulations from those at Marcus's yard; we love to see Marcus and his team have success and they're gracious enough to congratulate us. It was a good week!"

FIRST PUBLISHED 6:08PM, SEP 21 2020
It's particularly special given he was bred at Whitsbury by our stallion. Conceived, foaled and trained within a mile, it couldn't get more homegrown