The big fixture in the Belmont Park calendar has arrived – it's Belmont Stakes day! Usually the last leg of the US Triple Crown and run over 1m4f, the Belmont has had a one-off revamp this year due to the coronavirus pandemic and has been shortened to just 1m1f (a mile and an eighth).

Not only that, but instead of being the showpiece event in which we hope to witness a superstar three-year-old being crowned after writing their name in the history book with victories in the Kentucky Derby and Preakness, this year's race now precedes its two counterpart contests in a rather topsy-turvy schedule.

Saying that, the changes haven't dampened the hype leading up to the Grade 1 $1 million Belmont Stakes (10.42) and I'm extremely hopeful that my favourite horse in training, Tiz The Law, will get the job done for Barclay Tagg.

This attractive and eyecatching son of Constitution was purchased for just $110,000 as a yearling but quickly made up into a smart colt with a victory in a maiden special weight contest at Saratoga on debut, before landing the Grade 1 Champagne Stakes at this track in October last year.

I immediately selected him as my Kentucky Derby and potential Triple Crown winner and although helost his unbeaten recordwhen just third on his next outing at Churchill, he retained all of his lofty reputation because he just couldn't find any racing room.

Tiz The Law followed that unlucky defeat with strikes in both the Holy Bull Stakes and Florida Derby, hardly breaking sweat on each occasion when coming from off the pace to win by a clear margin, and he has already proved that he stays this trip very well. 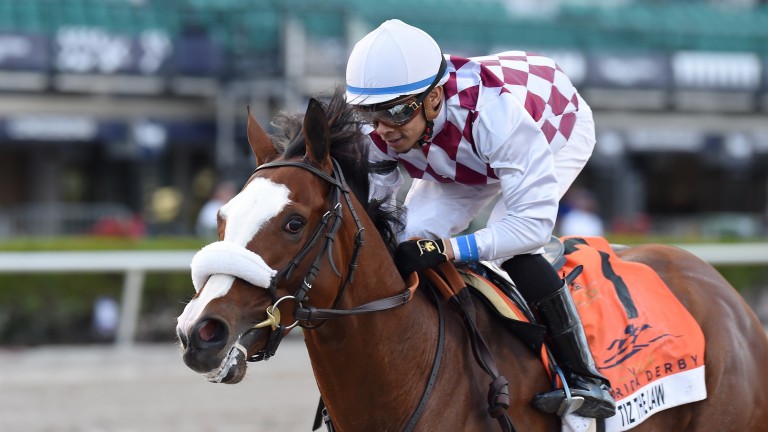 Tiz The Law: has a huge chance of winning the Belmont Stakes
Coglianese Photos

He's not going to be much of a price in here but Tagg has purposely campaigned him with these Triple Crown races in mind (bypassed last year's Breeders' Cup), and with the likes of Tap It To Win and Pneumatic going to go forward he should get the perfect pace to chase. I think we may witness a phenomenal performance.

The other banker bet on the card is the Bob Baffert-trained Gamine, who will break from gate one in the Grade 1 $300,000 Longines Acorn Stakes (9.15).

I'm not usually a fan of west coast shippers but Baffert has dominated Belmont Stakes day in the last few years and this $1.8m purchase could just prove a cut above in this field. Her morning line price of evens is justified.

She hasn't been headed on either start to date. Gamine ran out a decisive winner on her debut at Santa Anita before making every yard in allowance optional claiming company last time at Oaklawn.

That track wasn't sure to suit but she still showed blistering speed and great tenacity to fight off a late challenger. She has been drawn perfectly on the inside and Johnny Velasquez shouldn't have much trouble getting her to the front. She looks much the best.

Thethird Grade 1 on the card is the $250,000 Jaipur Stakes (9.53), which sandwiches the two aforementioned contests. This has a more wide-open look to it and although Stubbins and Pure Sensation catch the eye from a pace perspective, they may set it up for the fast-finishing Oleksandra.

Formerly based in Australia, this Neil Drysdale-trained filly takes on the boys in this 6f turf event but has proved she can do that in the past and looks well suited to a likely fast early gallop set by Pure Sensation.

She has poor tactical speed and will find herself last in the early stages, but Joel Rosario suits this six-year-old down to the ground and nothing will be finishing as fast as Oleksandra in the stretch.

She had a perfect prep run when a good second at Santa Anita on the comeback last month and has worked well leading up to this contest.

Two other runners catch the eye. The first of whom is the Tom Amoss-trained No Parole, who runs in the Grade 1 $250,000 Woody Stephens Stakes (5.25), which is scheduled very early on the card. Don't miss it!

This five-runner affair looks extremely trappy and there's not much separating the first four in the market, but it could be a case of catch me if you can for the selection, who has been drawn in gate one and was very impressive when making every yard last time at Oaklawn Park.

This colt looks a real speedster and Luis Saez will be at pains to get him out into an early lead. His latest 5f work at Churchill Downs (57.60sec) was rapid.

Finally, I can'tgo without tipping the extremely progressive Velezuelan Hug, who regular readers of this column will know is a horse I want to keep on the right side of.

Danny Gargan's fast improver steps up in class to tackle the Grade 2 $150,000 Pennine Ridge Stakes (7.42) but has demonstrated he is well capable of contesting a race of this nature with a scintillating change of gears on his last two starts.

The morning line suggests you may be able to get a bit of 6-1 about this unexposed grey, which is far too big. He should be half that price.

Place bets on international races with the Racing Post. Log in to your bookmaker accounts in the Accounts tab and then click cards to view the racecards

FIRST PUBLISHED 7:13PM, JUN 19 2020
He should get the perfect pace to chase. I think we may witness a phenomenal performance