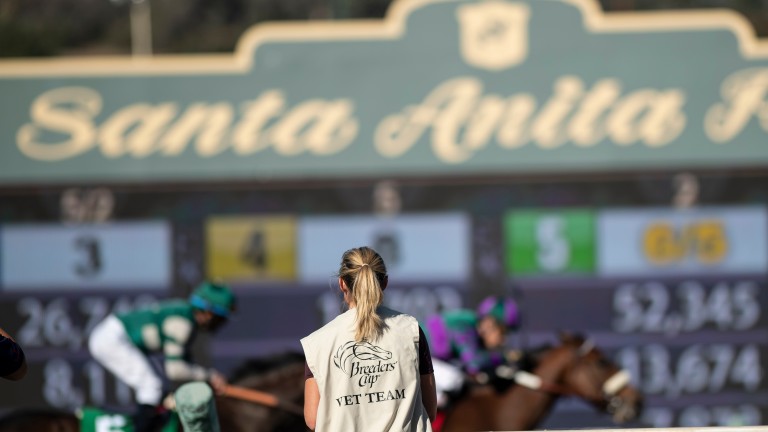 There is plenty of quality and quantityin the US on Saturday with a selection of Graded races at Fair Grounds and Santa Anita.

We will start with Fair Grounds, who host their feature meet with the showcase Grade 2 Louisiana Derby (9.49), worth a whopping $1 million and a key stepping stone to the Kentucky Derby, concluding a 12-race programme.

The likes of Grindstone (1996) and Gun Runner (2016), who was partnered by Florent Geroux, have won this race in recent years but this edition looks wide-open with a maximum field of 14 set to line-up.

There appears to be plenty of early pace in the race and I wouldn't be surprised if they go pretty hard early, which could work against the front-runners as they enter the stretch.

However, these kind of races tend to go to those who sit prominently no matter what fractions they go and I'm going to take a chance on Wells Bayou, who will hopefully tough it out on the front-end under the aforementioned Geroux.

Brad Cox's three-year-old has improved for each of his four starts and went close on his first attempt in Graded company when second behind the proven Silver Prospector at Oaklawn, posting a good Beyer speed figure in the process.

He has the perfect draw in stall three to make all here with his main asset being the speed he shows in his first three or four strides, which should allow him to get the rail.

The Grade 2 Muniz Memorial Handicap (8.42) also represents a good each-way punting opportunity on the card and I'm going to side with a horsewho hashelped me in the past and could easily outclass this field in Channel Maker.

Bill Mott's six-year-old hasbeen campaigned at the top level for some time now and rarely chucks in a bad run,witha career-best performance coming when landing the Grade 1 Man o'War last May.

He returned from an overdue break to finish a good fourth in the Mac Diarmida last time at Gulfstream and although he has never run at this track, I'll take a chance on him showing expected improvement from his return and going close at a price.

The Grade 3 San Luis Santa Rey (10.30) is the highlight on a good Santa Anita card, and although it looks a below-par edition of the race with United missing, it presents a gilt-edged opportunity for Oscar Dominguez, who is a confident selection.

Proven at this level and unlucky when third at this track last time (swung very wide off the bend), Oscar Dominguez has drawn a nice post position in stall four and has the services of the brilliant Umberto Rispoli, who will try and save ground where possible.

He is the class act of this field and should fend off market rival Ward 'n Jerry, who he comprehensively beat two starts back.

Place bets on international races with theRacing Post app. Log in to your bookmaker accounts in the Accounts tab in the bottom right and then click cards to view the racecards

FIRST PUBLISHED 6:00PM, MAR 20 2020
He has the perfect draw in stall three to make all here with main asset being the speed he shows in his first three or four strides