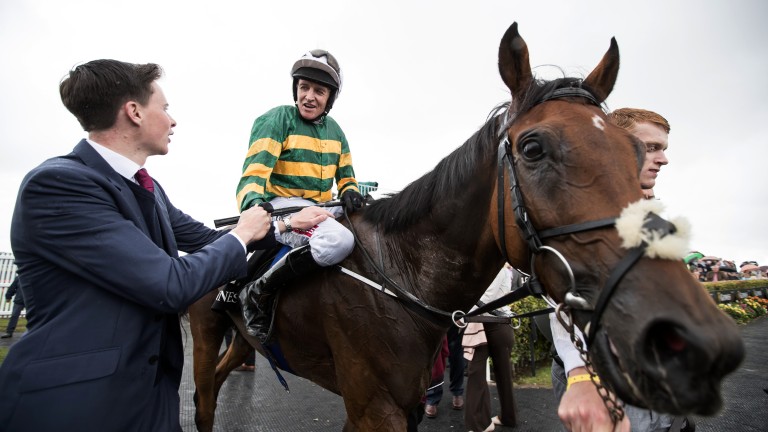 Joseph O'Brien and Barry Geraghty: team up again with King Leon
Patrick McCann (racingpost.com/photos)
1 of 1
By Tom Collins 8:30AM, AUG 6 2017

Only managed one victory from 16 starts when trained by Pat Fahy in Ireland but has been rejuvenated by Richard Newland and looks a hurdler to follow over the coming months. Beaten by a real improver on his first start in England, he was sent off as the even money favourite last time out and duly won with a little in hand. Should be a short price but will probably justify it.

It has been a fantastic Galway festival for Joseph O'Brien, Barry Geraghty and JP McManus and they team up again with this unexposed eight-year-old hurdler who looks to have been laid out for the race. Boasting form figures of 21 –both runs over fences –since joining Joseph from his father, he has his first start in handicap company over the smaller obstacles and looks off a nice mark.

Tom Dascombe and Richard Kingscote have a great record around Chester's tight-turning track and Zoffalee looks likely to win on just his second career start in the opening novice stakes. Well fancied when failing to justify his odds on debut, the son of Zoffany is well berthed in stall one and will look to pounce in the straight.

FIRST PUBLISHED 8:30AM, AUG 6 2017
Well fancied when failing to justify his odds on debut, the son of Zoffany is well berthed in stall one and will look to pounce in the straight