The Punt Daily: Maddy Playle with three to follow on an action-packed Sunday 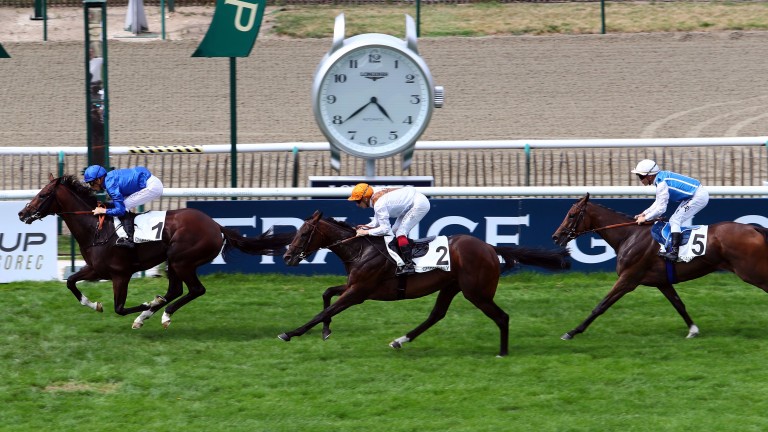 Top team: Thunder Snow and Christophe Soumillon have struck up a fantastic partnership, including when winning the Prix Jean Prat last time
Jean-Philippe Martini/Scoopdyga
1 of 1
By Maddy Playle 8:30AM, AUG 13 2017

France has been a happy hunting ground forThunder Snow, as it is where he has won both of his Group 1s, the Criterium International at Saint-Cloud as a two-year-old and the Prix Jean Prat at Chantilly last time. He is officially 9lb better than favourite Taareef – without considering his weight-for-age allowance – and 8lb superior to Al Wukair, Christophe Soumillon gets on fantastically with him and he is tactically versatile as he proved when front-running last time.

Standing for just €4,000, Group 2 winner Red Jazz has made an excellent start to life at stud with nine winners from 32 runners (28 per cent). The speedily bred Storm Jazz is the only debutante in what looks a weak novice stakes at Windsor and as a half-sister to six winners she looks a big price to make a winning start.

It's surprising God Given has gone somewhat under the radar, especially as she is a half-sister to multiple Group 1 winner Postponed and won a competitive Listed event in convincing style last time out. Luca Cumani has been typically patient with her, and this daughter of Nathaniel will enjoy the soft ground so there should be more improvement to come.

'He'll be at home in boggy conditions' - Paul Kealy sides with a mud-lover Nap of the day: best horse racing tips for the day's three meetings Spotlight Lucky 15 tips: four horses to back at Lingfield and Warwick on Sunday Signposts: key pointers for Sunday's racing The Punt Daily: Mark Boylan's free horse racing tip at Thurles on Sunday 'She might be even better over fences' - Justin O'Hanlon fancies two at Thurles