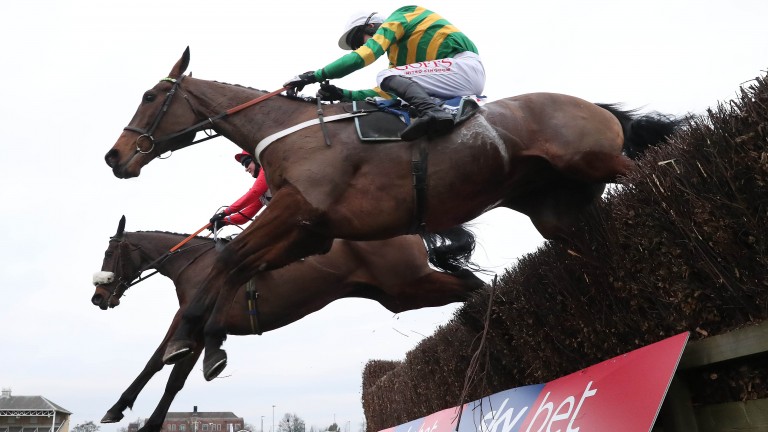 OK Corral (near) and Fingerontheswitch fight it out in last year's Sky Bet Chase
GROSSICK RACING
1 of 1
UPDATED 6:30PM, JAN 29 2021

Takingrisks
3.15 Doncaster
Buy at 4 on the index

With conditions soft at Doncaster on Friday and the ground likely to open up further on Saturday, just getting round could be enough for runners in the Sky Bet Chase to make the frame.

If survival is a priority, Takingrisks moves from the fringes of the faintly interesting to top of the list. He is a former winner of the Scottish Grand National and Rehearsal Chase, nailing Captain Chaos at the death in the 2019 running of the latter race.

That was on heavy ground, this season's Rehearsal was on good and, while Takingrisks seems to lack the pace for 3m on good ground these days, he still finished within hailing distance of winner Yorkhill.

That was a promising run, certainly with an eye to a greater test which he should get here. It is also worth noting that he had undergone wind surgery in the four weeks before the Rehearsal, which might go some way to explaining an unflattering SP of 40-1. He may well come on for the run.

Takingrisks represents a low-risk option here. He can be bought at 4, which would result in a handy profit for buyers if he so much as finishes fourth. He might not have to do much more than finish at all.

FIRST PUBLISHED 6:00PM, JAN 29 2021
Just getting round could be enough for runners in the Sky Bet Chase to make the frame