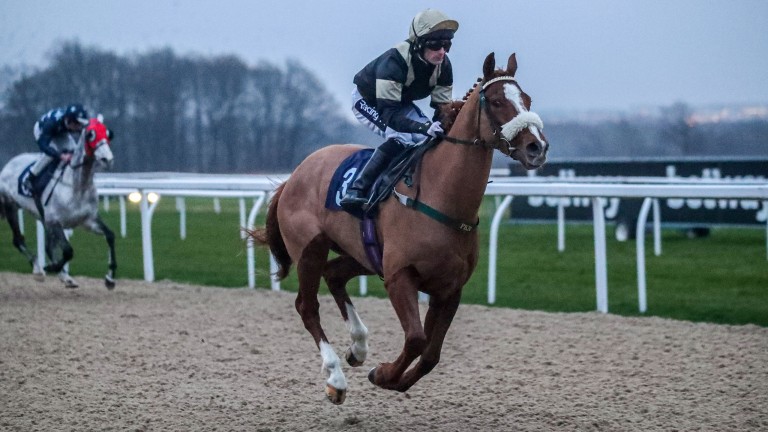 Ice Pyramid: a dual winner at Newcastle this year
John Grossick/racingpost.com/photos
1 of 1
By Tom Collins UPDATED 1:33PM, MAY 30 2020

British racing is set to return with a bang at Newcastle on Monday as the all-weather venueis set to host a cracking ten-race card. Punters will be looking to get off to a good start and here are three horses worth a second look.

Division one of the 6f novice stakes looks a pretty hot affair with the Richard Fahey-trained Bond's Boy, who boasts an official rating of 86, and Karl Burke's unbeaten Little Red Socks setting a good standard.

However, they could find themselves chasing home the well-bred Blazing Hot, who makes his debut under PJ McDonald.

Trainer James Tate has a good record when sending his runners to Newcastle with 17 winners from 77 runners (22 per cent strike-rate) and this colt has received rave reviews from the Newmarkettrainer in recent weeks.

Formerly trained by Richard Hannon, for whom this three-year-old could only manage three places from six outings, Written Broadcast has undergone a gelding operation and moved to the shrewd Jedd O'Keeffe over the winter.

Both of those factors could bring about significant improvement from this unexposed son of Gutaifan who showed good ability in maiden and novice company early last year.

His form tailed off in handicaps but he didn't appear to stay seven furlongs all that well so the return to a shorter trip is a positive. His draw in stall 12 will also help and heran well on his first start last year.

Phil Kirby has a couple of interesting runners in this 1m4½f handicap, but the most likely winner is this former Godolphin-owned five-year-old who looked to be improving at a rate of knots when last seen.

Ice Pyramid finished second on his sole start for Saeed bin Suroor but showed dramatic improvement under Kirby on the all-weather at the start of this year with a couple of five-length victories at this trackand an unlucky defeat at short odds at Lingfield.

He clearly loves racing at this venue, is proven off a layoff and remains chucked in off a mark of 92 judging by his most recent Racing Post Rating.

The Racing Post newspaper will be back in shops to mark the return of British racing on Monday, June 1! With extensive coverage of all the racing, interviewswith the biggest names, tipping from our renowned experts, writing from the likes of Alastair Down and all the cards and form, it's your unmissable guide to all the action. Pick up your copy on Monday.

FIRST PUBLISHED 1:18PM, MAY 30 2020
He clearly loves racing at this venue, is proven off a layoff and remains chucked in off a mark of 92

English tracks prepared for return of bumper crowds after easing of restrictions Paul Kealy reckons this chaser will never get a better chance Spotlight Lucky 15 tips: four horses to back on Sunday afternoon Nap of the day: best horse racing tips for the day's meetings