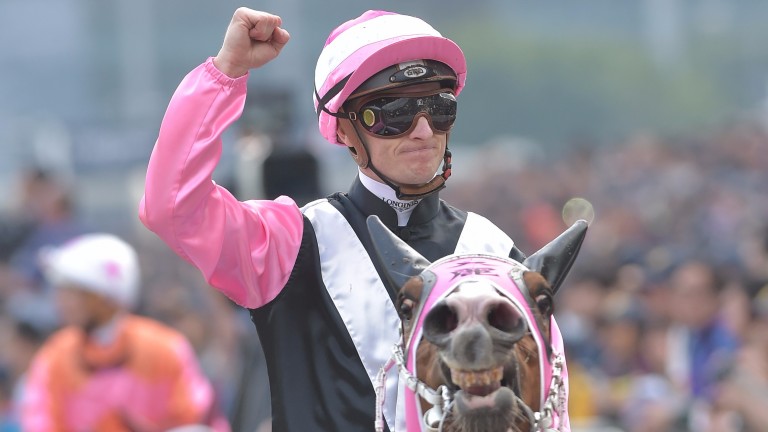 The Brazilian and his Aussie rival have collected over thirty per cent of the 576 races run this term – it would have been more bar suspensions – and Wednesday's Korean-themed Happy Valley card sees them atopmore hotpots.

Purton holds the edge early on with Raichu (12.15) and Savannah Wind (12.45) holding solid claims under top weight in the opening Class 5 contests.

Both have drawn stall three in races where most of the opposition find winning difficult and an inside berth also looks a prescription for success when Purton partnersDr Proactive over the minimum trip in the Shek Kip Mei Handicap (2.15).

This gelding’s trainer David Hall has endured a deeply frustrating run – eleven seconds since his last winner – but Dr Proactive should get a perfect lead from several rapid rivals and recent morning trials suggest the blinkers he wears in a race for the first time will suit him well.

Hall and Purton combine again with Fast Most Furious (formerly Seville Star for Jim Bolger) in the 2.45 but Moreira poses a potent threat at longer odds aboard Double Valentine.

Tony Cruz’s grey finished third to Churchill in a Leopardstown Group 3 during his days with Dermot Weld and should go close here, but Moreira’s best chance comes aboardHar Har Heart in the finale at 3.50.

John Size’s gelding has recorded three Class 4 wins over this trip at the Valley this term and ran better than the bare result suggests in an 1800m Class 3 on his latest start, having been forced to come the long way home from a wide draw.

Stall one and the prospect of a true pace will suit him perfectly back at his ideal trip.

Finally, Encore Boy has drawn a low gate to suit his freewheeling style and should make a bold bid under Karis Teetan in what looks a very a hot sprint at 3.15.

FIRST PUBLISHED 7:56PM, APR 17 2018
Recent morning trials suggest the blinkers he wears in a race for the first time will suit him well