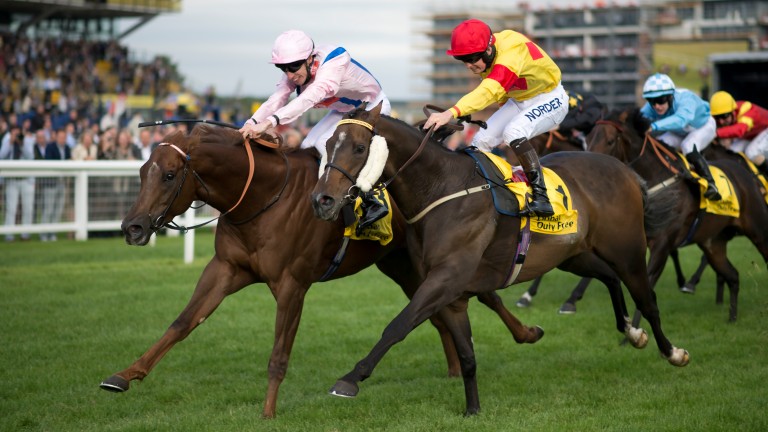 Last week was a good one for our sprinters with Battaash starring at Sandown and Magical Memory getting back on track at Haydock and hopefully Cotai Glory – another of our speedballs – can keep the run going in York’s John Smith’s City Walls Stakes (4.15) on Saturday.

He was much more like his old self in the King’s Stand Stakes at Royal Ascot last month and, although he has a few other engagements this weekend, he could well go to York.

There’s a theory some horses don’t like York, but he ran a cracker there in last year’s Nunthorpe when he was fourth, while he was third in this race in 2015.

A repeat of his Nunthorpe run would put him right there on Saturday and I’ve been pleased with him since Ascot, although there are a couple of dangers there including Marsha.

Musawaat is another entered at York on Saturday, but he wants a bit of cut in the ground. I think he’d get a mile in the John Smith’s Racing Handicap (1.55).

Moorside is set to step down, rather than up, in trip on the card. I don’t think she stayed in the Ascot Stakes, so we’re bringing her back to 1m6f for the John Smith’s Silver Cup (2.30). Like Cotai, she’s been fine since the royal meeting.

Nebo will be our main runner at Newmarket in the bet365 Superlative Stakes (4.00).

I think he’ll get the 7f trip no problem and I thought he ran well in the Coventry when he got left on his own. We’ve been pleased with him since and I’m sure he’ll run another big race.

He’s won on soft ground, but I don’t think it’s that important to him.
Angel Of Darkness could run in the Spa at Bedford Lodge Hotel EBF Stallions Fillies’ Handicap (2.15).

She lost a front shoe before her last race, which didn’t help, but she’s absolutely fine, so we’ll have a look.

Afaak is pencilled in for the bet365 Handicap (2.50). He ran great at Royal Ascot when he was seventh in the Britannia but was on the wrong side – they’d switched to the far side that day. He’s rated 92 now and I think that’s a handy enough mark for him.

I’d also like to run Plutonian, who bolted up by ten lengths at Windsor last time, in that as well. Hopefully he can build on the potential he showed that day.

Jallota will probably run in the SportingBet City Plate (3.00) at Chester as it’s a good opportunity for him if he’s on his A game.

Sante is also in the race and you can take that as an indication of the regard I have for her. She travels well in her races and has a very good pedigree, so it’d be nice to pick up some black type with her. Any cut in the ground would boost her chances.

I have two in Salisbury’s Bathwick Tyres EBF Novice Stakes (5.50).
Groveman is by Holy Roman Emperor and is a nice-looking colt I’m keen to get on a racecourse, so he could run.

Jack Regan, who has another option at Ascot on the same day, will work this week and that’ll tell us where to go. If he improves from his first run – a solid third at Newmarket – I hope he’d be on the scene.

Gloriux could also head to Salisbury for the Tony Brown’s 75th Birthday Handicap (6.20) and fast ground would help. He hasn’t really repeated the race he ran first time out at Doncaster, but if he comes back to that sort of form he’d have a chance in a race like this.

It’s just about finding the right spot for Percy Thrower, who is in the Bathwick Tyres Handicap (7.50), but he is in good nick.

Completing the Salisbury squad could be Dr Goodhead in the Party Continues At The Chapel Nightclub Handicap (8.20) and I think it’s worth her trying 1m2f. Tom Marquand, who rode her over 7f last time, seemed to think that’s what she wanted.

FIRST PUBLISHED 1:37PM, JUL 15 2017
Sante is also in the race and you can take that as an indication of the regard I have for her