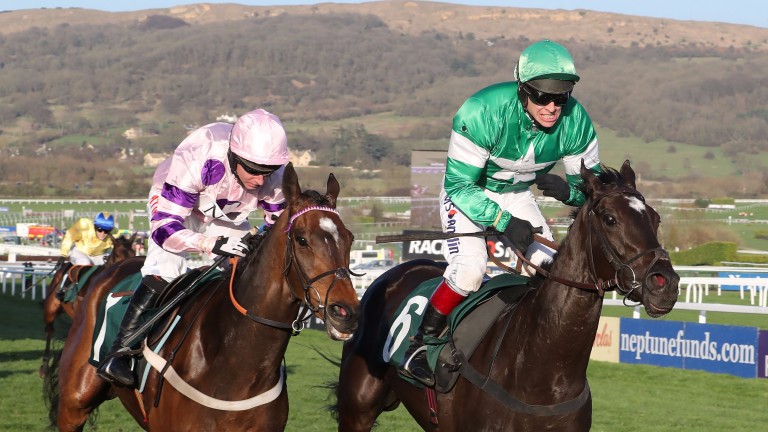 Well-regarded five-year-old who coped well with testing ground at Bangor last time and a huge effort is expected.

Sir Mark Prescott's filly showed bags of promise when staying on to take fifth on her debut over six furlongs at Wolverhampton last month and is expected to be suited by this stiffer test. The daughter of Dutch Art has since moved well on Warren Hill.

Closely matched with Black Corton on form but the ground swings it in his favour and he is expected to go close.

Thorough stayer who trotted up on the only occasion he ran on heavy ground on the Flat. Three sound runs over hurdles, particularly when second to Apple's Shakira over C&D last time, and is fancied to go well on his handicap debut.

Useful novice last season who raised his game to land a hot handicap at Kempton in January and may still be ahead of his mark.

Will relish the ground and is an excellent jumper. With question marks about all the protagonists he looks to have solid claims.

A race littered with potentially very well-handicapped horses, but Saturday's impressive Sandown winner Eragon De Chanay has already proved he is a fair way ahead of his mark and, providing he is has fully recovered from Saturday's exertions, could go in again.

Cause Of Causes(4.10 Cheltenham, nap)

A proven Cheltenham specialist, the Gordon Elliott-trained ten-year-old is going for his fourth Festival win and can repeat last year's victory in the Glenfarclas Cross Country Chase. A horse who hits his best form in the spring he can continue his fine record over the course en route to another tilt at the Grand National in which he ran second last year.

FIRST PUBLISHED 8:00PM, MAR 13 2018
Three sound runs over hurdles, particularly when second to Apple's Shakira over C&D last time, and is fancied to go well on his handicap debut