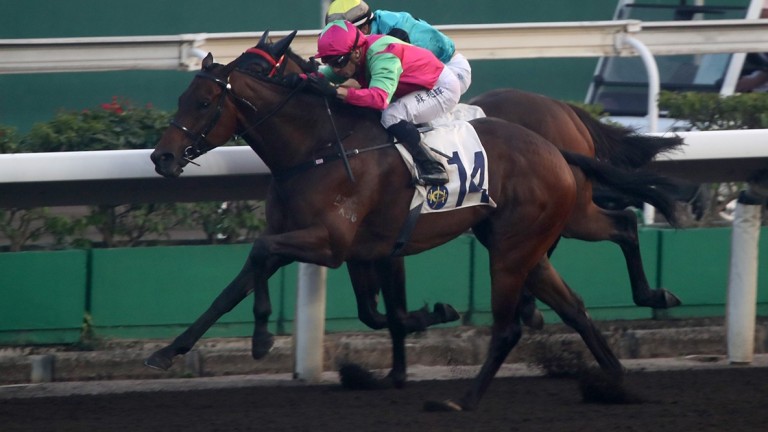 One of the success stories of Hong Kong racing may see his season climax ina trip to Meydan on Dubai World Cup night, but it depends on the outcome of the Lusitano Challenge Cup (8.35) at Sha Tin.

IfElusive State can win this1m½fhandicaptrainer Tony Millard will press connections to run the gelding in either the Group 2 Godolphin Mile or the Group 1 Dubai World Cup at Meydan on March 30.

The wily South African believes he truly has a new star in his stable, and who can blame him? Since transferring to Millard from the now-retired Derek Cruz, Elusive State has won all four starts and gone up 36lb in the handicap– his last three successescoming on the all-weather.

He will be ridden by Silvestre de Sousa, a jockey who doesn’t do things by halves. After forfeiting rides and admitting himself to hospital with a lower back injury on Wednesday, the British champion returns with a full book of 11 mounts.

De Sousa also rides another with Dubai aspirations in the shape of the Richard Gibson-trained Wishful Thinker (4.30), who may be aimed at the Group 1 Al Quoz Sprint if he retains his cracking form of late by winning the 6f handicap.

Zac Purton and John Size are set for a win in themile handicap (8.05) in which they combine with What Else But You, who has improved significantly in Hong Kong.

In winning over 7f last time he ran up to the promise he displayed previously when fourth to the accomplished Conte in aGroup 3contest over the same distance. The wide-drawn Rise High is the chief danger.

Size has come to the aid of Australian jockey Regan Bayliss, who has found it tough in his first month. He has booked the 21-year-old forChampion’s Way (9.10), who appears capable of overcoming an extreme outside draw and a 10lb hike in the handicap in the 6f handicap.

Champion’s Way, unbeaten in two starts over course and distance, takes a step up in grade but can give Bayliss an eagerly awaited first Hong Kong win.

FIRST PUBLISHED 6:00PM, MAR 9 2019
After forfeiting rides and admitting himself to hospital with a lower back injury on Wednesday, the British champion returns with a book of 11 mounts