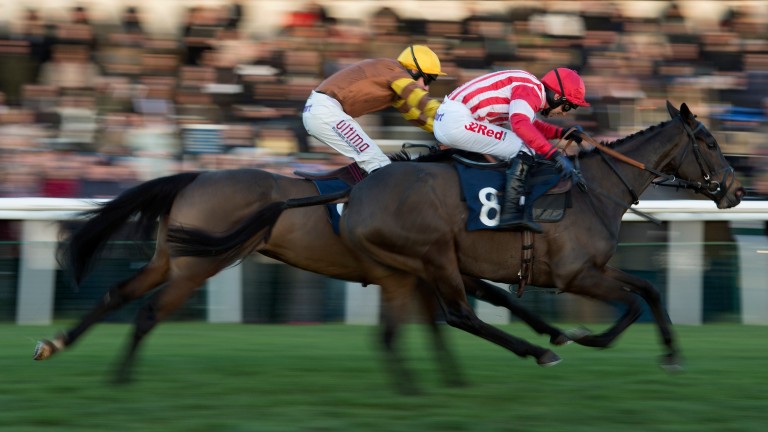 This is a competitive heat but Oscar Rose could be the one to focus on now provided with a stiffer test of stamina.

Fergal O’Brien’s charge has always been held in high regard and was second to Dame Rose in a Grade 2 bumper at Aintree. If she can translate that form over timber, she will win.

Oscar Rose didn’t have much luck when unseating her rider on her handicap debut at Cheltenham but shaped much better at Doncaster last time out. A bad mistake three out stopped all her momentum, but she was last off the bridle and travelled like a horse much better than a mark of 119.

When in the clear Oscar Rose stayed on well to grab fourth, leaving the impression the extra two furlongs she gets here could see her in a better light.

There are some unexposed rivals against her, but Oscar Rose has shown her best form with cut and that can’t be said for many.

The six-year-old made all to score at Wolverhampton over 6f two starts back before disappointing under a 6lb penalty when trying to follow up over a furlong further at Kempton just three days later.

However, there’s plenty of excuses for that poor showing and punters should take a chance on him reverting to this shorter trip, despite having to carry 1lb extra.

Taverner has been placed off higher marks in the past and this race could be run to suit, with many of his rivals having to come off the pace. He should get an easy time of things on the front end and his ability to stay further could make him difficult to peg back.

Reverting to the Flat has had the desired effect for Willyegolassiego and the in-form mare is fancied to rack up a course-and-distance hat-trick.

Neil Mulholland has impressed with his runners on the Flat and this mare has risen 11lb since scoring off 63 in December.

She still seemed to have a bit in hand when scoring off a mark of 70 just two weeks ago and a 4lb rise doesn’t look enough to stop her in what looks a weaker race.

The reliable top-weight is a strong traveller who finds willingly for pressure and, provided she gets a clear run, it would be disappointing were she beaten.

Her market rivals arrive with plenty to prove. Inn The Bull and Daily Trader are doubtful stayers, while Mystikana makes her debut for a new yard and must show more.

G Eye Joe showed a fair level of form in his first two starts as a juvenile and there’s plenty to like about his chances now he goes handicapping off a basement mark of 61.

He was sent off just 9-2 for an Ascot maiden won by Mythical Magic on debut before running the 92-rated On The Warpath to a shade over four lengths at Southwell.

He had some useful horses in and around him that day who have since done better, most notably the third, Desert Wind, who collared James Given’s gelding late on and is now rated 87.

Although G Eye Joe ran a shocker on his third run last time out, that was too bad to be true and Given’s horses are now in excellent nick. He has saddled two winners from just five runners in the last two weeks.

The step back up to 6f looks to be in G Eye Joe’s favour and, in a race that won’t take much winning, he is the one who looks open to most improvement.

FIRST PUBLISHED 8:00PM, FEB 6 2018
There are some unexposed rivals against her, but Oscar Rose has shown her best form with cut and that can’t be said for many