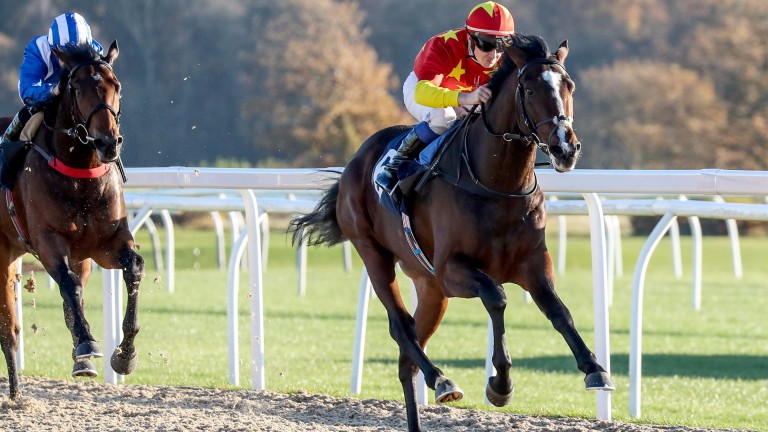 John Gosden's Middle Kingdom has been out of action since April but won on the all-weather at Newcastle last year
John Grossick
1 of 1
UPDATED 9:09AM, NOV 9 2017

John Gosden's classy type is fancied to remain unbeaten despite being off since April with injury.The three-year-old showed he was at home on the all-weather when breaking his maiden at Newcastle lastyear and has worked well on Long Hill of late.

The commentators' nightmare has some solid bumper form from last term and connections have high hopes for him over hurdles, so expect a bold bid especially as conditions look perfect.

She has been in cracking form since joining the Paul Nicholls team and is expected keep up the winning run.

Has shown reasonably useful form on both starts on turf and on AW and his prominent run-style is particularly well suited to Chelmsford. He is thetype to make further progress and is fancied to get off the mark at the third attempt.

A multiple course winner who has posted career best hurdle figures in two starts for today's pilot and is fancied to replicate that improvement now she reverts to fences.

Runner up to an above average rival on his hurdling bow at Chepstow last month and his conqueror has won again since. Colin Tizzard's promising five-year-old will be unlucky to find one as good today.

Wheels came off last season, but trip and ground will be fine and has claims off a mark of 133.

The Vincent Halley-trained six-year-old gets the vote to cope with a 6lb penalty incurred when he scored by four lengths over two miles at Clonmel a week ago. That was his second win over hurdles and the son of Robin Des Pres can follow up over the same trip with Phillip Enright on board again.

FIRST PUBLISHED 8:00PM, NOV 8 2017
The three-year-old showed he was at home on the all-weather when breaking his maiden at Newcastle last year and has worked well on Long Hill of late