Gentleman looks handicapped to score at Chelmsford on Friday 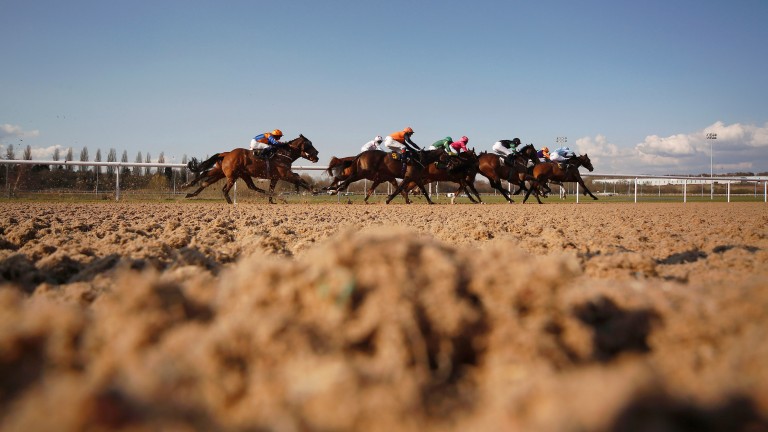 EXCELLENT GEORGE (7.15) can gain another course win in the 6f handicap. Stuart Williams’ gelding has been successful in his last two visits over this course and distance and, even though a 3lb rise for his win in a 0-80 here last time takes his mark up to 82, under the new initiative he can stay in the same grade under top weight.

SEA FOX (4.15) looks the one to be on in the mile handicap. Group-placed as a juvenile, David Evans’ gelding has fallen well down the weights during the past year and, despite finishing only third behind the prolific Goring in a 0-105 over course and distance last week, he was caught only in the last stride. A repeat should see him go two better.

GENTLEMEN (8.15) looks worth a punt in the 7f handicap. A four-time winner here including once over this trip, Phil McEntee’s gelding hasn’t been disgraced lately but is now 20lb lower than at the start of last year and drops into a 0-75 for the first time since winning here early in 2016.

MICKEY has a choice of engagements at the end of the week, including the 7f novice event (3.05) and the 0-105 handicap (4.10) at this meeting. Tom Dascombe’s unexposed gelding has improved in each of his three starts on the sand and was unfortunate to go down narrowly to the in-form Eljaddaaf over course and distance last week. He should take some beating in whatever turns out to be his preferred option.

TITAN GODDESS (8.00) can get back on track in the mile handicap. Mike Murphy’s mare has been in cracking form over this trip on the all-weather since October, winning three times at Chelmsford and once over course and distance. She finished last of five back at Chelmsford last time, but that was almost certainly down to the extra quarter-mile rather than the 8lb higher mark.

ZABEEL STAR (3.35) can win the 1m2f handicap. Karen McLintock’s gelding can miss the break, but if getting away on terms he has the form to win this. He has also been taking on better company for most of the winter and his third behind Desert Ruler and Shamrokh over course and distance last month looks good now with the winner and runner-up (twice) successful since.

NALAINI (7.15) looks worth taking a chance with in the 6f handicap for three-year-olds. Declan Carroll’s filly didn’t show a great deal in her first two starts but ran a lot better when fifth of 11 in a fillies’ novice event over course and distance this month. She is less exposed than her rivals and an opening mark of 58 may be lenient if building on that.

UPAVON (4.25) can win the 6f handicap. The gelding makes his debut for Tony Carroll, but he’s been running well lately including when just beaten by Tropics at Chelmsford a month ago. He is still well handicapped on his narrow defeats in a couple of 0-105 contest over course and distance this time last year.

SHAMSHON (4.15) looks interesting in the 5f handicap. Stuart Williams’ gelding has had possible excuses for his recent defeats, but the handicapper has still dropped him another 3lb which means he is a stone lower than at this time last year, while he is down to 0-80 company for the very first time.

ATTAIN (4.00) is given another chance in the 1m5f handicap. Archie Watson’s gelding could never get involved when fifth behind the prolific pair Star Ascending and Sky Marshal over 1m4f here last Friday, but this race has a lot less depth to it and, although still 4lb higher than when winning here last month, he is well handicapped on his form early last year.