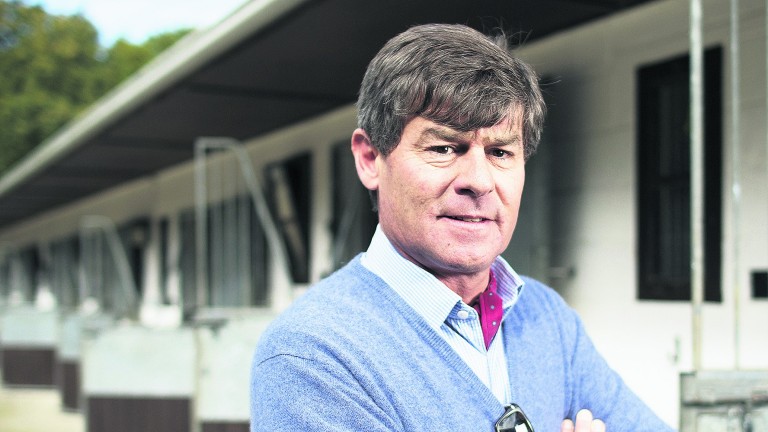 Simon Crisford: four of the trainer's string have tested positive for equine influenza
Edward Whitaker/racingpost.com/photos
1 of 1
By David Baxter UPDATED 10:23AM, AUG 15 2017

Elation fulfilled the promise of her debut with a win at Ripon next time out, while those who kept the faith with Star Of Zaam were belatedly rewarded when he scored at Catterick.

This colt's pedigree features winners over various trips and, while he will probably stay further in time, a drop back to six furlongs could pay more immediate dividends.

Having travelled nicely into contention, his effort flattened out in the final furlong and he should be much better when next seen. The third from the race, La La Land, also deserves a mention having stayed on well from the rear.

Simon Crisford's juveniles have been going along nicely, and he should have another winner soon in this filly. Settled under Jamie Spencer, she made some fair headway before tiring but was not beaten far in fifth and there was a decent gap back to the rest of the field.

A slow start didn't help him and, when trying to make up ground, he was a bit green and was also forced to move out wide to the centre of the track to challenge.

It might be he is not seen to best effect until tackling further, perhaps even next year with his middle-distance pedigree, but he is one to keep an eye on.

On only her second start, this filly was pitched into Group 3 company and may have been closer with better luck in running.

She was one of the last off the bridle, having been keen, but was then unable to make a clear challenge, with jockey Sean Levey reporting to the stewards he had been denied a clear run.

Trainer Richard Hannon mentioned post-race that she is a good filly, and chances are there is still a lot more to come from her.

Brian Meehan's juveniles usually improve for their debut, and after a slow start he is now getting among the winners. Barraquero's victory in the Richmond at Goodwood was the highlight of a good month with four juvenile successes, and he is already on the board for August.

We have yet to see many of Farhh's progeny hit the track, but there are encouraging signs from the small sample size, with Dee Ex Bee an impressive debut winner at the Goodwood festival.

With the season heading to autumn, there will be more mile races for the juveniles, which could offer the chance for more of Farhh's progeny to make an impact.