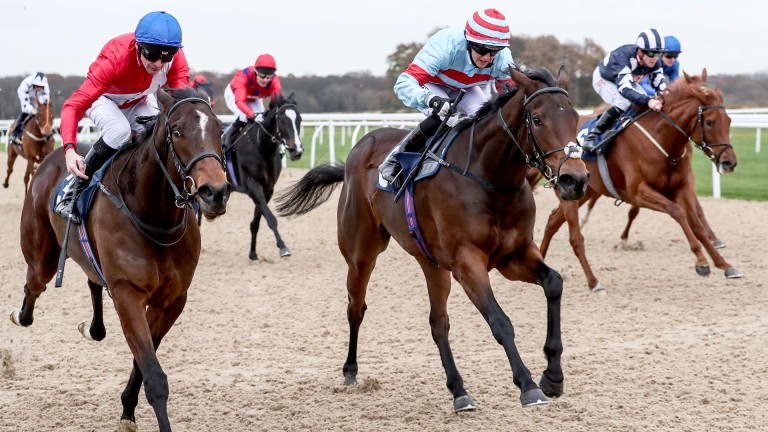 Vintage Folly (striped cap) is the one to side with in the feature event at Yarmouth
John Grossick
1 of 1
By Aaron Ashley 8:00PM, SEP 19 2017

Khafoo Shememi was a disappointment when last seen at York in June, but he has an excellent record fresh and can add to his course-and-distance success the previous month.

Richard Hannon’s colt made all to defeat Escobar in a Listed race here that day and, while he now returns following a 95-day layoff, two of his three career wins have come on his seasonal debut.

The three-year-old had won both of his starts over a mile prior to his York flop and he had excuses that day.

Having run just seven times, he is also open to plenty of improvement.

Three of the last four renewals have been won by three-year-olds and the Classic crop should have it between them again given the class act, Richard Pankhurst, has never won at a mile and arrives on a lengthy losing sequence.

In a below-par Listed race, it could be worth taking a chance on the unexposed Vintage Folly.

So Mi Dar defeated Group 1 winner Nezwaah to land the pot 12 months ago and Hugo Palmer’s three-year-old looks the only filly in the line-up who might just be capable of reaching those heights.

She has had just three starts and a reproduction of her second behind Shutter Speed in the Musidora, in which she relished soft ground, would see her go close.

Things didn’t go to plan for her most recently when tailed off in a Group 2 at Saint-Cloud – the quicker conditions and step up to 1m4f were against her – but she is better than that.

This is a competitive handicap in which six last-time-out winners take their chance and the untapped potential of Clearly could be the deciding factor.

John Gosden’s filly made her debut only in July when she was too green to do herself justice that day, but she improved a bundle for that first outing when getting up late home to shed the maiden tag at Kempton two weeks ago.

She found herself with plenty to do and still had eight horses to pass with two furlongs to run, but she displayed an impressive burst of speed and got up to win a shade cosily.

The runner-up that day, Tamih, had gone close on both her previous starts and had split the 91-rated Important Mission and Kynren, who has since won a handicap off 79.

That suggests the handicapper may have been generous to let in Clearly off just 77.

Gracious John may not be as good as he once was, but he shaped with more encouragement at Leicester last time out and could build on that for David Evans.

A string of disappointing efforts have seen him slide down the weights, but he won a handicap off a mark of 107 in December last year and could be well treated off just 95.

His close third behind Waady and Kachy in a competitive conditions race at Leicester last week was certainly a step back in the right direction.

His Racing Post Rating of 100 was his highest recorded since chasing home Kimberella in April and Katherine Glenister, who takes off 7lb, keeps the mount.

With his sights lowered and in favourable conditions, Gracious John could take some stopping.

FIRST PUBLISHED 8:00PM, SEP 19 2017
She has had just three starts and a reproduction of her second behind Shutter Speed in the Musidora would see her go close