Dylan can roll to victory under big weight at Hereford 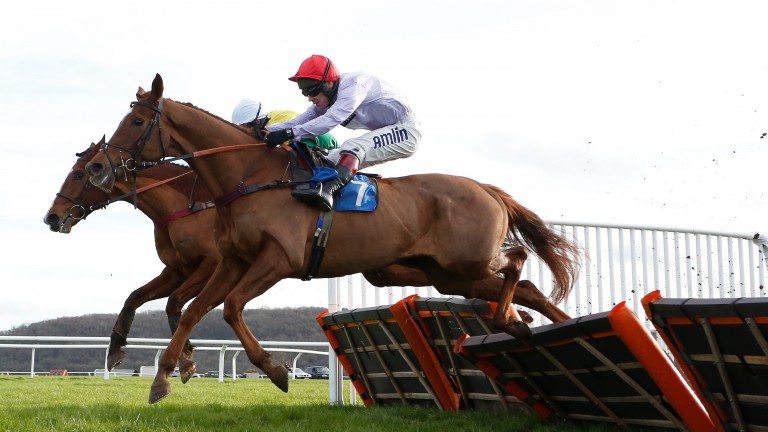 SACKETT (5.15) pulled up in his first two races after joining Neil King, but things have got better recently and he has shown his turn is coming with minor honours in his last two outings.

The seven-year-old was a creditable third at Huntingdon in February and did even better here last time out, making Colt Lightning pull out all the stops and finishing well clear of the also-rans.

This looks an easier assignment and he can overcome an 8lb rise in the weights.

FRANK N FAIR (4.15) has had a good campaign over fences this winter and may be able to make the most of her lower hurdles mark in the 3m1½f handicap.

The ten-year-old wasn’t at her best last time out, but that perhaps came a bit too soon after a hard-fought third in the Sussex National. She is 10lb lower in this sphere and could easily bounce back after a short break.

ROLLING DYLAN (2.45) can defy his big weight in the novice chase. Philip Hobbs’s gelding has won twice over fences this winter, most recently at Chepstow, where he produced a career-best in shrugging aside his two rivals. That form makes him the one to beat even though he is conceding 6lb or more to all of his rivals.

DAPPER MAN (3.00) has just one win to his name but can double his tally in the 5f handicap.

Roger Fell’s four-year-old was only seen off in the final furlong of a similar heat at Newcastle in February and is better than the result suggests last time out as he lost his place after some early interference and did well to recover into third.

The return of Tony Hamilton is also a positive as he was on board when Dapper Man struck at Wetherby last summer.

PORT SOIF (5.30) flopped at Wolverhampton last time out but she had previously shown a liking for this course and distance, winning on her debut for Kenneth Slack here in January by two and a quarter lengths.

The four-year-old has been given a short break and remains feasibly treated if a return to this track sparks a revival.

Don Cantillon’s WESTERN WAY (5.40) has won twice since embarking on a sand campaign and may add a third success in the opening 2m handicap.

He scored at Chelmsford and Kempton after Christmas and showed he was still feasibly treated when runner-up in a steadily run race at Kempton.

The nine-year-old didn’t enjoy the Fibresand surface at Southwell last time so that modest effort is easily forgiven.

FIRST PUBLISHED 8:00PM, MAR 26 2018
She is 10lb lower in this sphere and could easily bounce back after a short break