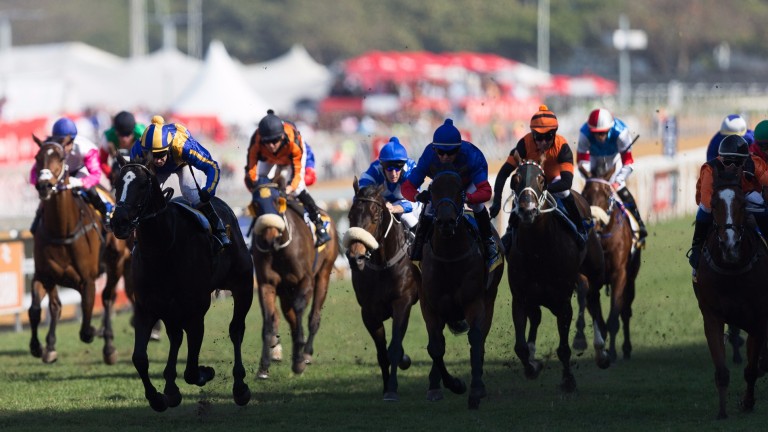 Greyville's turf track is a 2,800m (1m6f) triangular-shaped, right-handed circuit with a run-in of just over 2f. Low number draws are preferable, particularly over 7f and a mile.

Racing returns to the turf track at Greyville in Durban on Sunday with an eight-race card which begins with a fascinating 14-runner 7f maiden juvenile plate (10.45).

Michael Miller and Dennis Bosch's Green Phantom and Disillusioned finished virtually upsides one another when second and third on their debuts over 1f shorter at Scottsville three weeks ago, and both should come on for the experience over the extra furlong, but outside stalls ten and 11 are far from ideal.

Doug Campbell and Frank Robinson's Over The Bay and Colour My Fate finished close up in third and second behind Walls Of Dubrovnik on their debuts here on Polytrack in February and March. Both should run well again here from stalls one and six.

However, the eye is continually drawn to Warren Kennedy's mountSecret Is Oursfrom stall four on his debut. The well-bred son of Dynasty represents Gavin Van Zyl, who has had six winners from his last 30 runners. The selection is a brother to Bela-Bela, a dual Grade 1 winning-filly over a mile and 1m2f on this course, and 7f could prove an ideal starting point for this R800,000 (£40,000) purchase.

The feature contest is the Kings Cup (1.40), a mile Listed handicap. Robbie and Shannon Hill's Camphoratus heads the handicap with a merit-rating of 114 and the five-year-old mare is two from three over this course and distance, but she faces a stiff task attempting to give away weight to the geldings from stall ten.

Brett Crawford's G G'S Dynastyhad Tristful, Born To Perform and Amor Ardiente behind when finishing strongly to win the Michael Roberts Listed Handicap on Polytrack here in January over 1f further, having previously won easily over a mile at Scottsville, and the versatile four-year-old also won over 7f here on turf under today's jockey Craig Zackey when fresh in October.

He can confirm his latest winning form and complete a hat-trick from a 3lb higher mark after a small break. Tristful is considered the main danger.

Finally, the Dean Kannemeyer and Keagan De Melo trainer-and-jockey combination can complete a hat-trick in the 13-runner 5f handicap (2.15) through Wolfgangfrom stall five.

The three-year-old has shown notable pace to win his last two starts over 5f on the Polytrack here in January and February and can complete the sequence back on turf despite rising 10lb for those two victories.

Place bets on South African Racing and get live text commentaries on the Racing Post. Sign in with your favourite bookmaker via the accounts button and bet directly from our racecards

FIRST PUBLISHED 6:00PM, MAR 21 2020
G G'S Dynasty can confirm his latest winning form and complete a hat-trick from a 3lb higher mark after a small break