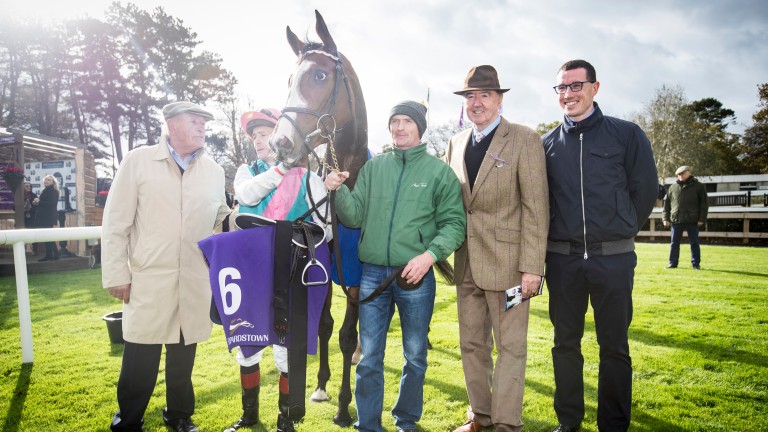 Contingent could be a lively one for Oaks glory
Patrick McCann
1 of 1
By Steffan Edwards UPDATED 6:50PM, MAY 14 2018

THERE are a few Ballydoyle fillies towards the head of the Oaks market, but I think they can all be taken on, especially Clemmie, who very much looks a miler in the making.

On breeding it’s likely that Happily will stay 1m2f, but whether she’ll get another quarter-mile on top of that is open to question. She’s a sister to two Guineas winners, Gleneagles and Marvellous, and it’s worth remembering that the latter was sent off favourite for the Oaks after winning the Irish Guineas but could finish only sixth behind Taghrooda and was again well held in the Irish Oaks.

Magical has better prospects of staying the trip as she’s a sister to Rhododendron, who finished second to Enable in last year’s Oaks. She was only fourth in the Fillies’ Mile but raced away from the favoured stands’ rail, so it might be wise not to judge her too harshly on the bare form.

However, her best efforts all came on soft ground, including her win in the Debutante Stakes when she handled testing conditions much better than Happily and September. She’s out of a Pivotal mare and perhaps needs cut to be seen at her very best.

On paper September looks best bred for the job. She’s by Deep Impact out of Irish Oaks winner Peeping Fawn, so stamina shouldn’t be any concern, and the way she was finishing her races last year backs up the thinking that she should improve over middle distances. The concern with her is that she’s not very big, so there has to be a chance that scopier rivals improve past her over the winter.

At bigger odds it wouldn’t come as a surprise if Bye Bye Baby improved past one or two of her higher-rated stablemates as she steps up in trip. She progressed with every start, rounding off the season by winning a Listed race at Navan and finishing third in the Group 3 Killavullan Stakes, but she’s bred to do much better over middle distances at three, being by Galileo out of Oaks runner-up Remember When.

That said, the one from the Ballydoyle stable who interests me most is a bit of a dark horse. Aidan O’Brien had only seven first-time-out two-year-old winners last year and it’s worth noting what they did afterwards. Saxon Warrior and September went on to prove themselves at Group 1 level, Seahenge won the Group 2 Champagne Stakes, Delano Roosevelt went on to finish runner-up in the Beresford Stakes and I Can Fly was third in the Oh So Sharp Stakes second time out.

Family Tree didn’t run again and neither did SARROCCHI, but this filly made a striking impression on her debut in a backend Leopardstown maiden and looks to have any amount of potential.

Despite being poorly drawn and held up in a race that was otherwise contested by those ridden prominently, she overcame greenness to come home strongly and win with a bit in hand.

Five days earlier she was in the sales at Goffs as a result of China Horse Club and Coolmore dissolving their partnership, but after topping the sale at ¤215,000 she was soon back at Ballydoyle. Those in the yard clearly knew she had plenty of ability and she was backed to justify it – from 10-1 to 7-2 – becoming the only one of the stable’s seven debut winners to be sent off outright favourite.

Her pedigree is encouraging with the Oaks in mind. By Galileo, she’s out of an Oasis Dream mare who ran her best race over the longest trip she tried – a 1m1½f Group 3 in the French provinces. She’s also a sister to a French filly who stays beyond 1m4f, albeit at a low level.

Open to any amount of improvement, she has a decent chance of overtaking a few of her better-known stablemates once the trials come round.

I can also see I Can Fly developing into a candidate. She was impressive at Dundalk first time out and lost little in defeat up in class in the Oh So Sharp. Her pedigree (by Fastnet Rock out of a Montjeu mare) would give plenty of confidence that she’ll make up into a middle-distance filly, but that is tempered by the fact that her half-brother Viscount Barfield has shown all his best form short of a mile.

Looking outside the Ballydoyle yard, CONTINGENT takes my eye.

Her trainer Dermot Weld had a disappointing 2017 as a result of a virus which lingered in the stable for some time, but her late-season success in a Leopardstown maiden was a bright spot. Drawn in the outside stall, she was caught wide throughout but still found a good turn of foot to come through and win decisively from Hamdan Al Maktoum’s well-related Alghabrah, with more than five lengths back to the rest.

A daughter of Frankel out of Prix Marcel Boussac winner Proportional, she’s bred to be high-class and, while her trainer suggested she could be quick enough to go the Guineas route to begin with, she’s a half-sister to 1m4f Listed winner Variable, who was also trained by Weld, and it’s likely that it’s over the Oaks trip that we’ll see the best of her.

I could find only six Weld runners who ran in the Oaks, but they include Blue Wind, who won it back in 1981, and Tarfasha, who was runner-up to Taghrooda in 2014. Chinese White was sent off 5-1 in 2008 and, while she could only finish ninth at Epsom, she did go on to win in Group 1 company. So if Contingent does make the journey, you can be sure her trainer thinks she has a live chance.

FIRST PUBLISHED 12:43PM, APR 19 2018
Dermot Weld had a disappointing 2017 as a result of a virus, but her late-season success in a Leopardstown maiden was a bright spot