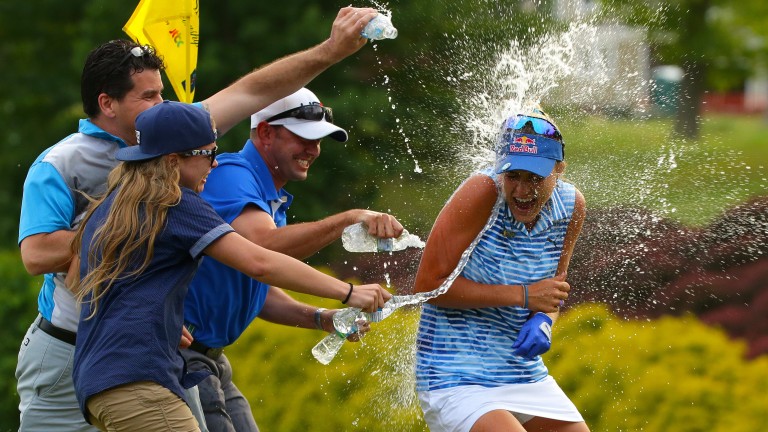 Lexi Thompson (right) is showered by well-wishers after her victory at Kingsmill in May
Hunter Martin
1 of 1
By Jeremy Chapman 7:57PM, JUL 12 2017

The premier tournament on the LPGA circuit, the Women’s US Open, is 11-1 the field and open is the word for it with more genuine contenders than you can shake a stick out.

One of the US president’s fleet of golf courses, Trump National at Bedminster, hosts its first Major, with Lexi Thompson, who at 12 was the youngest Open qualifier ever ten years ago, topping the betting in New Jersey.

Justice would be done if she pulled it off after the ludicrous retrospective four-shot penalty slapped on the statuesque six-footer mid-final round at the year’s first Major, The Inspiration, for what most of us would call a minor rules infringement.

The way she dealt with the clumsy, ruthless way that was handled was wholly admirable, fighting back to get into a playoff even when weighed down by such a burden. Sadly, she couldn’t quite go the extra mile, losing to So Yeon Ryu’s birdie in the shootout.

She has since displayed her mental strength in putting that incident to the back of her mind and simply getting on with business. Six weeks later she was a winner at Kingsmill, since when she has twice been a runner-up before placing seventh at the second Major, the PGA Championship at Olympia Fields.

Admittedly, she did give it away at the Manulife after being four clear, missing three short putts down the stretch before Ariya Jutanugarn slotted the winning birdie in the playoff.

However, Thompson has always had a brittle nerve and been vulnerable with the flat stick.

She and new number one Ryu are playing the best golf right now, with Ryu adding to her fortuitous Inspiration triumph with a second victory at the Walmart, and both can be backed at double-figure odds.

It could be that odds-makers have overreacted to Thai star Jutanugarn’s second-round withdrawal with a shoulder injury from last week’s Thornberry Hill Classic, having missed the cut the previous week at the PGA.

Her agent says it was “purely precautionary” so she didn’t risk damaging her chances in the big one. It’s a risky bet but you won’t often get 33-1 about this thrilling talent and it’s only a few weeks since her Manulife win.

Classic swinger Sung Hyun Park has only just joined the LPGA Tour after dominating the weaker Korean circuit but is already looking a bit tasty.

She is yet to win in the States but has looked the part on the big occasion, placing second, third and sixth in three of last year’s Majors. Park has enormous potential and 20-1 is a decent price given her consistency.

six-time Major champion and Olympic gold medallist, is never far away although 12-1 is short enough given that she’s not quite as good as she was.

Lydia Ko, favourite last year, is a 33-1 chance this time around. She has changed so much of her game, equipment and entourage but there is little evidence yet that it was the right thing to do.

When to bet By midday

Where to watch Live on Sky Sports 4 from 7pm

Weather forecast Very hot (up to 33C) with some rain today, thundery on a cooler Friday followed by a cloudy but probably dry weekend