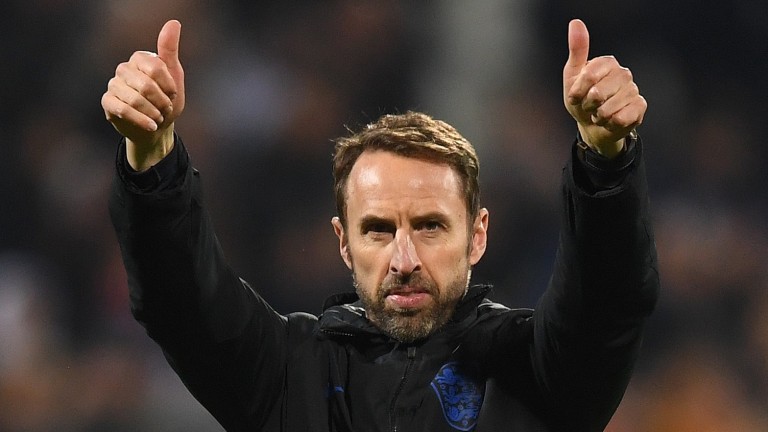 England manager Gareth Southgate has an abundance of talent at his disposal
Getty Images
1 of 1
UPDATED 5:04PM, JAN 20 2021

'The Golden Generation', 'Football's Coming Home', 'This Time More than Any Other Time' – you may have lost count how many occasions England have been talked up as potential tournament winners. I know I have.

Bear with me, though, as I explain why 2021 can be the time they finally deliver on the big stage.

With everything going on outside sport, people would be forgiven for thinking June is another world away. But what a summer we could have to look forward to as the vaccine rush steps up a pace.

The European Championships, Wimbledon, the Open and Olympics were all sorely missed last year and never have their proposed return caused such expectancy for sports fans.

The thought of a summer football tournament, coupled with the possibility of crowds, offers some much-needed hope as the dark days of winter feel longer and more gloomy than ever.

England fans should have every reason to feel optimistic about the Three Lions, even with five months still to go until the Euros.

Little has been made of Gareth Southgate's men playing all of their group games at Wembley, which would be a major advantage, even if fans are not fully back in stadiums by then.

However, the major plus for the England boss is the surge of young players staking a claim for a place in the squad and a number of other stars returning to form.

You could look at every Premier League squad to see the talent available to Southgate and the onus is on the boss now to make the right choices.

Foxes aces are fancied to shine

Hip hop legends De La Soul famously claimed that 'Three is the Magic Number' and three Leicester aces should play a big part in the England camp this summer.

James Maddison has rediscovered his form at a good time. He offers that link between the midfield and forward line but has also added more goals to his game.

Aged 23, Harvey Barnes has found his feet in the Premier League and has shown intelligence and energy under the shrewd stewardship of Brendan Rodgers.

But for me the find of the season has been James Justin, who on current form would be England's first-choice left-back if the tournament started next week.

Having come through the ranks at Luton, the defender was spotted by the Foxes at League One level and he has comfortably taken two giant strides up to the top flight.

Justin's calmness on the ball and positional sense mean he is seldom stretched, but he also has the pace to recover if required.

Young stars queuing up for their chance

Not many would have thought three years on from a World Cup semi-final, the likes of Dele Alli, Jesse Lingard and Ruben Loftus-Cheek would slip almost completely off the England radar.

In the strangest of all seasons, though, other players have given Southgate a welcome selection headache, with not just standout displays but also top-flight consistency.

Top of that list is Phil Foden, whose club displays continue to belie his slight build and there appears nothing the 20-year-old can’t do going forward.

Everyone offers something different and, in the case of Rice, James, Jones and Phillips, can play in different positions – a key factor in any major tournament.

Another massive plus for England is the return to form of some players who looked like their international days might be over.

To date there have been few better than John Stones this season, after a remarkable turnaround for the centre-back.

He had one foot out the exit door at Man City, with talk of a return to Everton last summer, only for him to persuade one of the toughest managers to give him another chance.

Stones, the stylish centre-half England have been seeking since Rio Ferdinand called time on his international career, has taken that second chance with both hands. And as long as he stays fit, he should be first-choice central defender.

Another player fighting his way back into the fold is Luke Shaw. When you consider Manchester United paid £30 million for him in 2014, it's ridiculous that he only has eight caps.

Injuries, weight gain and an ever-changing managerial merry-go-round at Old Trafford has hampered him badly, but Shaw now looks back to his best and is still only 25 years old.

Michael Keane also fits into that bracket, with the former Burnley man having been given a huge lift by working with a defensive legend at Everton in the shape of manager Carlo Ancelotti.

You would have got long odds 12 months ago on Keane being in the squad, but he is now odds-on in a place to be in the 23-man party.

Eric Dier has reinvented himself as a centre-back regular at Tottenham and he may also yet get another chance to be a penalty hero.

The regulars are still shining

I've almost reached 900 words of my first column without mentioning Harry Kane, Raheem Sterling and Marcus Rashford. All three are gimmes to make the squad and continue to show they are big game players on the biggest of stages.