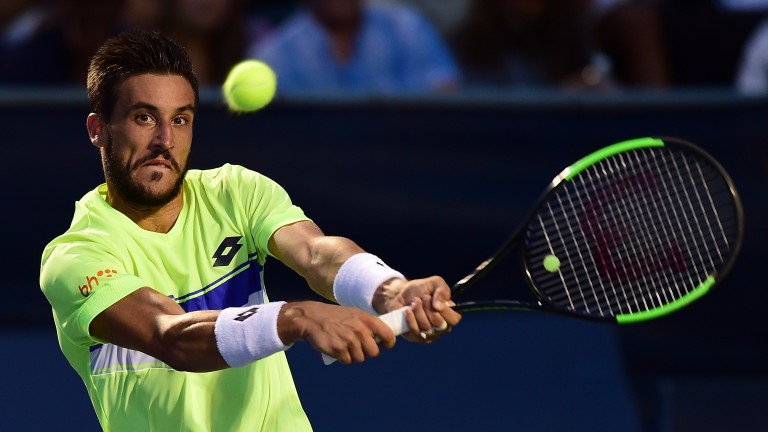 Cuevas v Dzumhur
Damir Dzumhur is having the most productive season of his career and he looks a solid favourite to see off clay-court specialist Pablo Cuevas in the US Open first round.

The Bosnian has suffered two consecutive first-round exits at Flushing Meadows until 2016 when he triumphed 6-4 6-3 4-6 7-6 over Bernard Tomic.

He arrives at the tournament full of confidence after a run to the final at the Winston-Salem Open last week which included victories over three players ranked inside the top 50.

Those efforts lifted Dzumhur's ranking to a career high of 56 and further progress could be made at the US Open where he stands a good chance of making the third round for the first time.

Cuevas is the number 27 seed but his high ranking (31) is based mainly on clay-court results.

The Uruguayan has lost 63 (57 per cent) of his 110 hard-court matches and hasn't got further than the second round at the US Open despite eight previous appearances at the tournament.

Troicki v Gombos
Viktor Troicki has struggled during the America hard court-season, losing three successive matches, but he can emerge from the doldrums by defeating Norbert Gombos in New York.

The Serbian veteran was once ranked at 12 in the world although his record at the US Open (six wins and seven defeats) is modest.

However, Troicki had won 12 consecutive Grand Slam first-round matches before a retirement against Florian Mayer at Wimbledon this year and his experience should see him through against Gombos, who is making his US Open debut.

Gombos has climbed into the top 100 for the first time this year but he has won just four of 15 top-level matches on hard courts.

Riske v Vandeweghe
At her best Coco Vandeweghe can challenge the top players in the women's game.

However, Vandeweghe's radar is not always finely tuned and she looks a short-priced favourite to win her US Open first-round match against compatriot Alison Riske.

The head-to-head is fairly even with Riske winning four of the nine meetings.

And Riske has the edge in more recent times, winning three of the last four.

There is always the chance that a fully focused Vandeweghe will turn up and blow Riske off the court but the 25-year-old has struggled in her build-up events, losing in the first round at Cincinnati and New Haven.

Riske has lost her last three matches but seems to enjoy playing Vandeweghe and looks a touch overpriced.

McHale v Pavlyuchenkova
Christina McHale has won three of her last four first-round matches at the US Open and is not without a chance of springing a surprise against Anastasia Pavlyuchenkova.

The markets strongly favour the Russian, who has won all of their last four meetings.

However, three of those matches went to three sets including a tight contest at New Haven this month which Pavlyuchenkova won 3-6 6-2 6-4.

Mentally, Pavlyuchenkova has the edge but another close match is on the cards and McHale looks a good value bet to win at least a set.