Yeovil can make most of strong road form at Bristol Rovers

Charlton may see trophy as a distraction 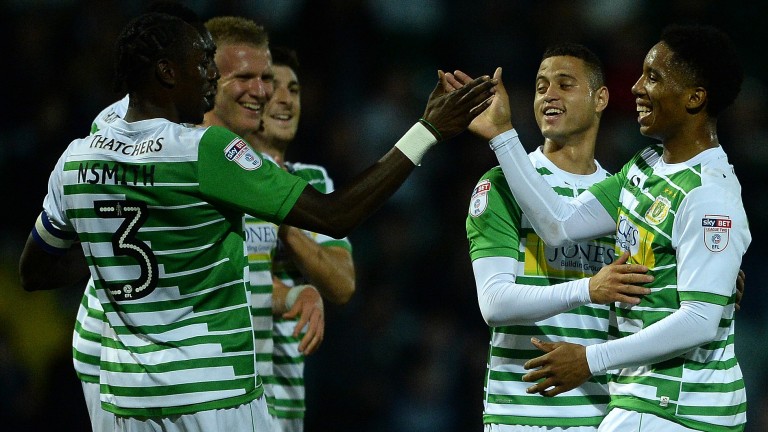 Yeovil will hope for more to smile about when they visit Bristol Rovers
Harry Trump
1 of 1
By Steve Davies 8:00PM, OCT 8 2018

Bristol Rovers v Yeovil
Yeovil have a knack of producing away-day masterclasses but they may not need to dish up anything fancy to take care of Bristol Rovers in their EFL Trophy clash at the Memorial Stadium.

Yeovil’s 6-0 romp in Sky Bet League Two at Newport last month still stands out and it came hot on the heels of a 4-0 triumph at Notts County.

The Glovers have shown they can deliver on their travels and they have a soft spot for this competition. Semi-finalists last season, they have lost just three times inside 90 minutes in their last 18 ties.

Fresh from holding Exeter to a 2-2 draw on Saturday they should be ready for another local spat against out-of-form Rovers.

The Gas play a divisoion above in Sky Bet League One, but they go into this Southern Section Group D clash after just two wins in their last 11 games and they have failed to find the net in their last three.

Stevenage v Charlton
Lee Bowyer could do without an EFL Trophy game this week and his Charlton side look worth opposing at League Two highflyers Stevenage.

Stevenage, who crushed Swansea’s kids 5-0 in their opening assignment, should see it differently and they are in excellent form.

They have won five of their last six games at home culminating in Saturday’s impressive 3-1 dismantling of Colchester.

Cambridge v Southampton U21
Southampton’s academy, the goldmine which churned out the likes of Theo Walcott, Alex Oxlade-Chamberlain and Adam Lallana, is no longer the starmaker it once was.

Fewer gems emerge from their Marchwood base these days, though there are still enough good young Saints to suggest they can follow up their opening triumph at Colchester with a win at Cambridge.

Boss Radhi Jaidi is encouraging his team to do well in this competition and they can only be heartened by a decent start to their Premier League 2 season and excellent efforts against Porto’s and Dinamo Zagreb’s youngsters in the Premier League International Cup.

Cambridge are one off the foot of League Two, without a win in seven games, and they lost 3-1 at Southend in their first group game.