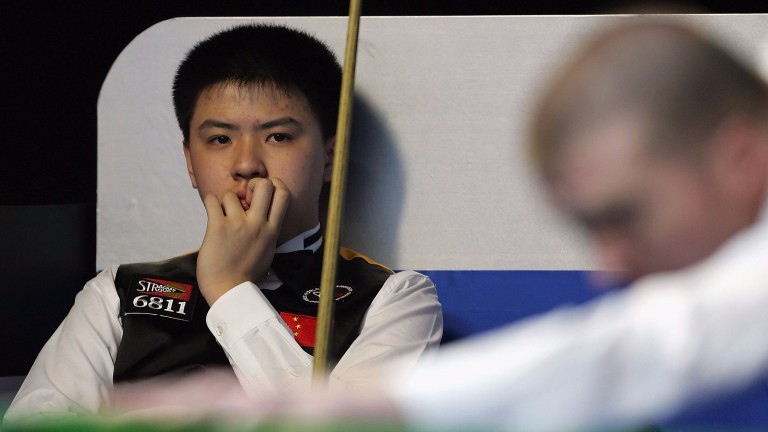 BBC & Eurosport, from 10am Wednesday

Day v Guodong
Xiao Guodong struggled with his game last season but he has returned to somewhere near his best in the current campaign and could be a live outsider in the Betfred World Championship this year.

At 28, Xiao could be one of the most progressive players on tour while his first-round opponent at the Crucible Theatre Ryan Day, despite having enjoyed a pretty positive campaign, is beginning to look a little exposed as a performer.

At his best Day could still go close to ruling the world, but there’s a definite question about his temperament on the big stage and the preference is for Xiao, who absolutely steam-rolled Tyler Rees, Sam Baird, who played at the Crucible last year, and Coral Northern Ireland champion Mark King in the qualifiers.

Day beat Xiao in the Shoot Out but their more meaningful clash came in the quarter-finals of the 2014 German Masters. The Welsh ace triumphed 5-2, but Xiao posted the two biggest breaks in Berlin that day and of the two he’s made greater strides since.

N Robertson v Saengkham
Neil Robertson has had a quiet season by his lofty standards, but it’s possible he’s saving his best for last.

The Melbourne cueman is one of the finest breakbuilders the game has ever seen and he’s way too good for it all to go to seed so early in his career.

The Thai will scrap for all he’s worth. It’s likely he will be ground down over the best of 19 frames, but Saengkham made four breaks above 65 against the Aussie in their previous meeting and that makes it difficult for anyone trying to assess handicap bets.

Robertson has shown enough evidence that he’s capable of being a threat in Sheffield and the best play could be to back the clash to feature at least a couple of century breaks.

Barry Hawkins, the favourite to progress in his clash with the Leicester underachiever, has served his snooker apprenticeship well and has transformed from the player who for ages could not win a match at the Crucible to being runner-up in the best-quality world final in history.

Hawkins is obviously the one to beat, but should Ford turn up playing on the front foot an upset is not an impossibility.

Ford won their only long-distance match 9-5 in the 2009 UK Championship, but Hawkins is a much more complete performer now than he was then.

Hawkins looks on the short side, though, and if Ford can keep his head he could be generously priced with a start of 4.5 frames.