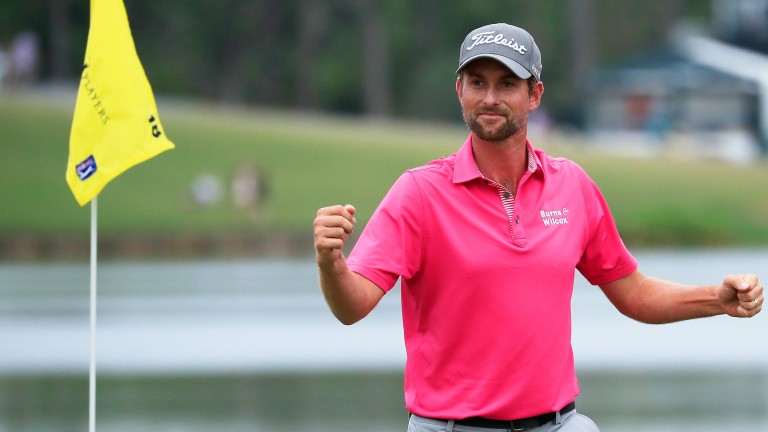 Story so far
Ante-post 55-1 chance and PGA Tour maiden Byeong Hun An retained his lead through the third round of the Wyndham Championship, shortening from 7-2 to 9-4 after a bogey-free Saturday 66.

The 15th hole nearly destroyed An's scorecard – he sliced his drive into waist-high fescue and hooked his provisional ball into a stream – but after a frantic search his original ball was located. A brilliant bunker shot meant he salvaged a par five when an eight was looking a strong possibility during the ball search and the Korean is yet to drop a shot all week.

An's 17-under-par effort is not enough for favouritism, though, because Webb Simpson managed six third-round birdies to keep his challenge for a second Sedgefield Country Club success well and truly alive. Simpson, who started the week freely available at 11-1 and went off a well-backed 10-1 market leader, is one shot behind.

Final-round advice
Byeong Hun An kept his nose in front in round three, but his performance over the closing few holes does not bode well for his hopes of retaining that position all the way to the finishing line.

An got away with two horrendous drives at the 15th hole to suggest his long-game was starting to creak, while an ugly missed five-foot birdie putt at the following hole showed that his often misbehaving putter could be set for an unruly Sunday.

Stellar iron-play and supreme scrambling has allowed An to flourish this week, but a dodgy driver and a putrid putter are not ideal tools to be carrying into a final-round battle. Particularly one with a local hero who is oozing confidence in all departments of his game.

Webb Simpson declared after his third-round 65 that there is no venue on the PGA Tour where he feels more comfortable than Sedgefield, where he secured his maiden title in 2011 and has contended numerous times. This week, he arrived with his game in mint condition, having closed with a 64 for runner-up honours behind Brooks Koepka in the WGC-FedEx St Jude Invitational last Sunday.

There is a juicy financial carrot for Simpson in round four – victory would mean a total of about $2m in prize money from the tournament itself and the Wyndham Rewards bonus money which is paid at the end of the PGA Tour regular season. Given Simpson won $1.095m in Memphis last week, he can approach the cash grab in a cool, calm fashion.

A hot, sticky, windless day is expected, with the possibility of a short late-afternoon thunderstorm, and it would be a surprise if Simpson was not going down the stretch with a golden opportunity of home-state glory. He has become one of the most consistent performers on the planet and should pick off enough easy birdies to post a competitive 72-hole total.

Brice Garnett has putted much better than he usually does this week, but Sunday pressure seems likely to see the journeyman revert to type. Viktor Hovland and Paul Casey are threatening figures two shots behind Simpson, but Hovland would probably take a runner-up cheque if you offered it to him, while Casey has admitted that he is struggling to read the greens. A position of 43rd in the strokes-gained-putting stats for Casey this week underlines that discomfort.

A runner-up finish would be enough for Hovland to secure full playing rights for next season, so that is the main objective for the Norwegian youngster in round four. Obviously he would love to triumph – a win would gain him access to the FedEx Cup playoffs – but the newcomer may adopt a more conservative approach over the closing holes if it helps to guarantee second spot.

An, Hovland and Casey are the biggest potential party poopers for North Carolina man Simpson, but punters who have a decent investment on the favourite are advised to hold their position. Last year's runaway Sawgrass champion is easy to back at 2-1, which is a fair price for those who have yet to get involved in the outright market. Racing Post Sport followers on at the pre-tournament 10-1 have every right to be hopeful of a full return.

Final-round twoball punters are pointed towards Sepp Straka, an improving Austrian youngster who is enjoying a hot streak in his rookie campaign and should carry too many guns for Mackenzie Hughes in the 6.40pm UK and Ireland time match.

Matt Wolff, another super-talented PGA Tour newcomer, can also be followed (6.20pm). The 3M Open champion can feast on birdies and leave playing partner Johnson Wagner in his wake.

The final pairing of An and Simpson is scheduled on the tee at 7.40pm UK and Ireland time.