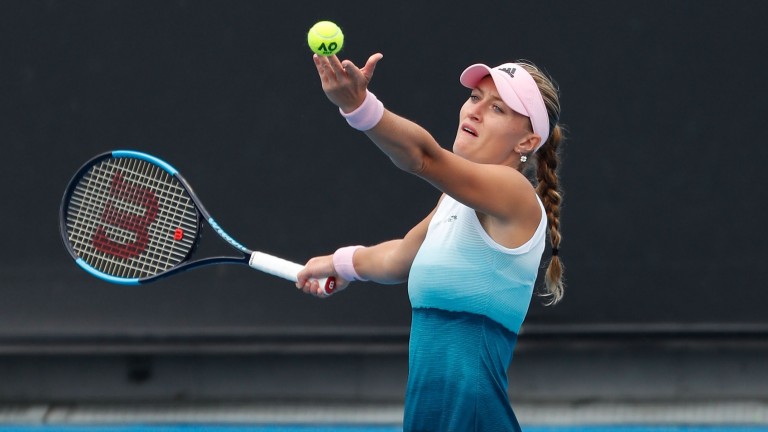 Kristina Mladenovic can put a first-round exit at the Australian Open behind her
Darrian Traynor
1 of 1
By Aaron Ashley 3:36PM, JAN 28 2019

Petra Kvitova was overhauled by Japanese starlet Naomi Osaka in Saturday's Australian Open final, but bookmakers make the classy Czech a warm order to defend her crown in St Petersburg.

Kvitova hadn’t dropped a set prior to the final in Melbourne and routine wins over home favourite Ashleigh Barty and progressive American duo Amanda Anisimova and Danielle Collins suggest she’s slowly returning to her best.

However, the Czech will have loftier targets this season and whether she will be fully wound-up after a taxing fortnight in Australia remains to be seen. There have also been suggestions she may decide to swerve the tournament.

Even if Kvitova opts to give her title defence full focus, a potential last-16 showdown against big-hitting Belarusian Victoria Azarenka is far from easy. Donna Vekic, Daria Kasatkina, Maria Sharapova and Julia Goerges are also lurking in the top-half the draw which make quotes of 3-1 look short enough.

Instead, punters should opt for the slightly less competitive bottom-half with an each-way wager on Kristina Mladenovic advised.

Mladenovic, runner-up to Kvitova 12 months ago and champion in 2017, seems to thrive at the Russian venue and a low-key start to the season should ensure she arrives in St Petersburg fresher than most.

The French ace was a first-round casualty in the Australian Open but that was also the case in 2017 and 2018 and she tends to use this event as the one to kick-start her season.

An opener against out-of-sorts Latvian Jelena Ostapenko poses a winnable opportunity and she is expected to outrun her odds, particularly as bet365 won't apply a Rule 4.