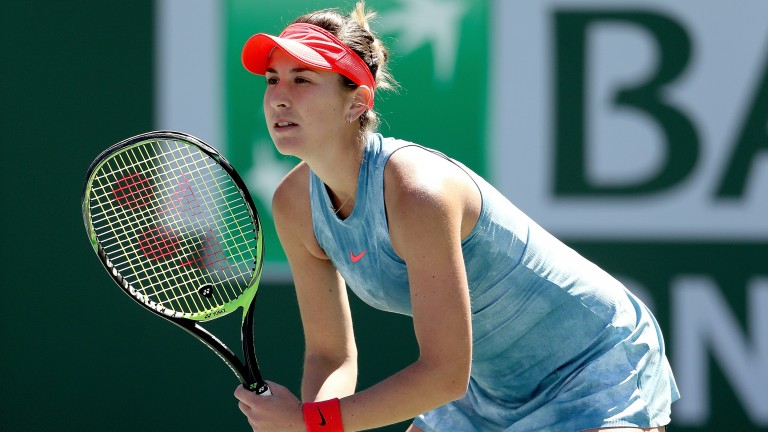 Belinda Bencic looks back to her brilliant best after a series of injury problems
Matthew Stockman
1 of 1
By Adrian Humphries 8:00PM, MAR 18 2019

No player on the WTA and ATP Tours has won more than one tournament this season, but that stat is likely to change in the near future for obvious reasons and it could happen this week in the Miami Open women's singles.

And while there are some big names not on that list – Simona Halep, Serena Williams, Indian Wells runner-up Angelique Kerber, Elina Svitolina, defending champion Sloane Stephens, Ashleigh Barty, Madison Keys and Garbine Muguruza to name just eight – the younger generation are offering up such promise and potential that we could see someone notch a second 2019 singles crown in Miami.

Five players – world number one Osaka, Kvitova, Halep, Kerber and Svitolina – have a chance to top the rankings after Miami.

Kvitova needs to reach the final at the new Hard Rock Stadium venue to become the top woman for the first time in her career, but the Czech has seldom been at her best in the searing Florida heat.

Halep's preparation is pretty good, but the Romanian often finds one or two too good for her.

Anyone who held outright vouchers of up to 66-1 about Bencic for the BNP Paribas Open will have been gutted to see her lose to Kerber in the semi-finals, but that loss can perhaps be attributed to the Californian event coming a bit soon after her 100-1 Dubai triumph in February.

There's no way that 66-1 was ever going to be repeated this week but it’s difficult to quibble with 33-1 about the resurgent Swiss ace.

While Bencic, who hammered Osaka at the Tennis Garden, could also prosper on clay in 2019, she has done her best work to date on faster courts so this effectively represents the last chance for a while to recommend her in earnest with the European slow-court cam­paign starting soon after Miami ends.

Serena Williams could bounce back in a tournament she has had more success in, but it's difficult to advise her after mid-match retirement against Muguruza in Indian Wells. Likewise, trophy-holder Stephens could fare better in her home state but looks below her best, while Daria Kasatkina's game has deserted her this year.

Of the positives, Serena's elder sister Venus Williams can outperform her odds, as could last year's Miami runner-up Jelena Ostapenko, who seems to be finding some form and confidence with the clay season nearly upon us.

Keys could go well but unfortunately for the American, Barty is close to her in the draw.

Yastremska may shine again soon and another talented young­ster Amanda Anisimova may be in the winner’s circle before long, but it's probably a bit soon before 15-year-old Cori Gauff goes all the way in top-level company.