Wright looking primed to shut down the Power 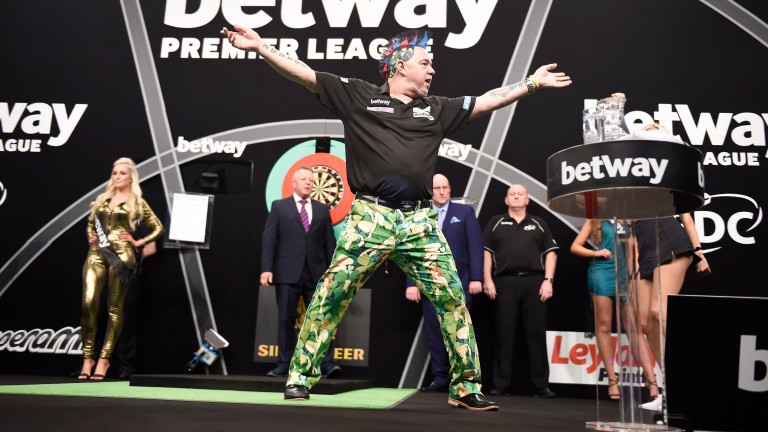 Defending Grand Slam champion Michael van Gerwen and six-time winner Phil Taylor remain on course for a semi-final showdown in Wolverhampton – but Peter Wright might have a say in that.

While Mighty Mike has been absolutely flying and should have simply way too much firepower for Brendan Dolan in tonight’s first quarter-final, Taylor’s tussle with Wright is far tighter to call.

Taylor, whitewashed 5-0 by Darren Webster in the group stage, improved to beat Jeff Smith 10-5 in round two on Wednesday, but it wasn’t a vintage effort.

“I’m pleased to be through though that performance wasn’t anywhere near good enough,” said The Power.

Van Gerwen v Dolan
Head-to-head: Van Gerwen leads 15-3
We are at the quarter-final stage of a major darts tournament, the stage where tension is as high as the stakes and the competition at its fiercest, yet world number one Michael van Gerwen goes off at an extraordinary 1-25 to beat Brendan Dolan.

Dolan might as well not bother toeing the oche if the prices are right, as they surely are.

It’s best-of-31 now and the amiable Irishman is 11-10 in receipt of 9.5 legs. Would you back him to win the seven legs required to cover that bet? At this stage last year Van Gerwen dropped only four legs against Kim Huybrechts so we know how ruthless the Dutchman can be.

The two men met in the group stage on Sunday and Van Gerwen won 5-1 with little effort.

The best bet looks to be over 12.5 maximums. Van Gerwen won’t show any mercy – he pinged 12 on his own in that massacre of Huybrechts last season.

That best-of-21 semi-final in Glasgow went all the way as Snakebite held his nerve.

It means Taylor has failed to win three of their six meetings in 2016 so Wright has to be confident, especially given that Taylor is a long way from his best.

A 5-0 drubbing by Darren Webster in the group stage should have been a wake-up call for the six-time champion but he was barely any more impressive in seeing off BDO representative Jeff Smith in round two.

Wright, who reeled off eight legs in a row in a 10-3 hammering of Darryl Fitton, is enjoying life with yet another set of new arrers and is well worth a punt.