Wozniacki to show how much she’s learned 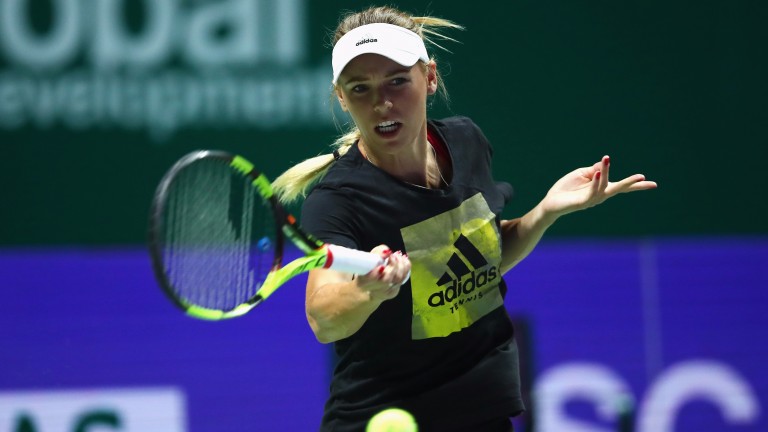 It could all come right for Caroline Wozniacki in Singapore
Clive Brunskill
1 of 1
By Adrian Humphries UPDATED 8:14PM, OCT 27 2017

The WTA Finals looks one of the most open heats in the sport's history and that has seen bookmakers price up all eight combatants at between 5-1 and 9-1.

There are no big pre-tournament prices to be had on the WTA Tour this week and for that reason ante-post stakes should be kept sensible as pretty much any one of the octet has a claim to taking the title.

World numbers one and two Simona Halep and Garbine Muguruza are the joint-favourites. But while both are obviously capable of shining, Wimbledon champion Muguruza may have to work overtime to get out of her difficult-looking White Group, in which she trails in her personal series against Karolina Pliskova and Venus Williams while she also suffered a recent defeat to the section's youngest representative Jelena Ostapenko.

Williams has not been at her best in recent weeks, but the American veteran is a past master at ratcheting up her effort when the occasion requires it and she is not easily opposed.

French Open champion Ostapenko is not without a chance in this illustrious company, but it still has to go down as a tough assignment for the powerful Latvian and single-figure odds hardly scream value.

In a tough heat, the advice is to have an interest on Red Group contender Caroline Wozniacki. The Dane, a former world number one - the top spot is once again up for grabs this week - has enjoyed a positive campaign but if anything given her admirable consistency she has not won much.

Wozniacki used to tend to buckle against top-class rivals, but in a section in which she has positive head-to-head records against two of her three rivals, it may be worth chancing that she has left her best till last.

Punters can consider backing her to win her group and to keep it going in the knockout phase and take the title, but with Betfair and Paddy Power also quoting prices on players winning all five matches this confidence performer can be backed to stay unbeaten in the Far East this week at 60-1.

Outright punters should know that in the last two WTA Finals in Singapore, Agnieszka Radwan­ska was eased to a whopping 100-1 before triumphing in 2015, while last year Dominika Cibulkova drifted to 80-1 after losing her first two round-robin matches before winning three matches to take the title.