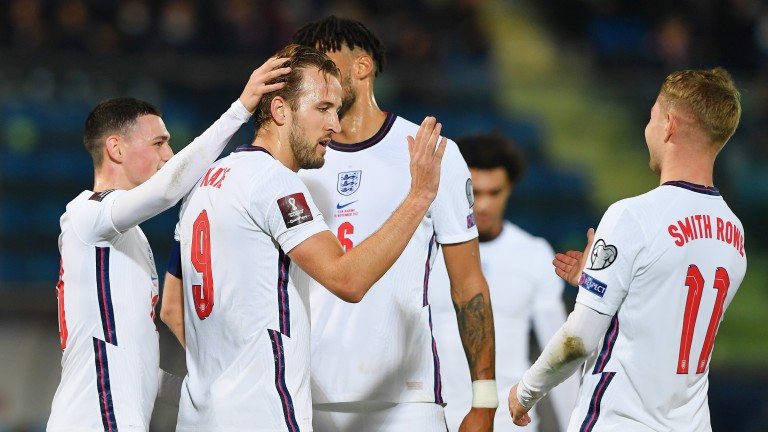 Euro 2020 runners-up England are 15-2 to win next year's World Cup in Qatar after sealing their place at the finals with an emphatic 10-0 qualifying victory in San Marino.

Harry Kane scored four times in the first half of the Three Lions' romp on Monday night and bet365 and Hills responded by trimming England from 8-1 to 7-1 to be crowned world champions in 2022. Bet365 make Tottenham striker Kane 8-1 to be top goalscorer at the World Cup.

Coral had priced up a 10-0 win at 20-1 before kick-off as England, missing Raheem Sterling, Jordan Henderson, Luke Shaw, Jack Grealish and Mason Mount, signed off their qualifying campaign in style.

Southgate's men, who lost on penalties to Italy in the European Championship final in July, are third-favourites for the World Cup behind 6-1 shots Brazil and holders France.

While the England manager can start planning for the finals, his Italian counterpart Roberto Mancini must plot a path through the playoffs after a 0-0 draw in Northern Ireland cost his side automatic qualification.

The Azzurri's Group C stalemate in Belfast meant they finished two points behind Switzerland, who beat Bulgaria 4-0 in their final qualifier, and Mancini's men are 12-1 to win the World Cup. The Swiss, who beat France at Euro 2020 before losing on penalties to Spain in the quarter-finals, are 100-1 to triumph in Qatar.

Italy missed out on a place at the 2018 World Cup after a playoff defeat to Sweden and they will be desperate to avoid the same fate this time around.

Scotland should be in better spirits going into the playoffs after they claimed a sixth straight win in Group F as goals from John Souttar and Che Adams saw off section winners Denmark 2-0 at Hampden Park.

The Danes, who reached the semi-finals of Euro 2020, had won all nine of their World Cup qualifiers before running into Steve Clarke's in-form Scots, who are 1,000-1 to lift the trophy in Qatar.