Progress should not hide another poor Les Bleus effort

Oliver Giroud provided a focal point on France recall though 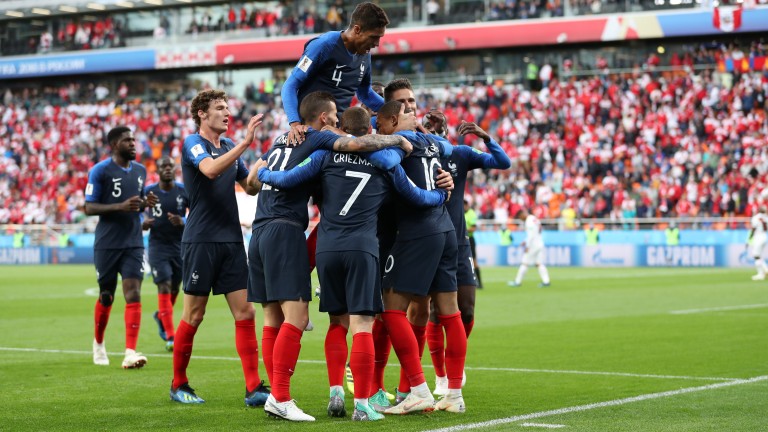 1 France price drift looks fully justified
France became the third team to seal a place in the knockout stages but their outright odds have drifted from 13-2 to 15-2 since the start of the tournament as punters have taken a dim view of a pair of ordinary performances.

There were a few spells in the first half when the French turned up the heat but they played with excessive caution for the majority of the game and allowed Peru to stay in contention.

Defensively, they were largely untroubled thanks to the sterling efforts of N'Golo Kante, who offered excellent protection to the back four.

But it was another disjointed performance from a side who aren't coming close to living up to their pre-tournament hype.

2 Giroud selection was justified
Almost all of France's best attacks revolved around centre-forward Olivier Giroud, who provided a focal point to the attack.

It was Giroud's deflected shot which fell to Kylian Mbappe for the winning goal and the 31-year-old laid on a decent chance for Antoine Griezmann with a clever knock-down.

Griezmann plays better with a big striker and, in the first half, the ingredients seemed to be in place for France to run out easy winners.

However, France went into their shell after the break and were almost punished when Pedro Aquino's long-range effort thumped into the outside of Hugo Lloris's right-hand post.

3 Tired Peru may go home with a whimper
Peru had plenty of possession but were unable to match the energy of their noisy supporters.

As the game went on they started to run out of ideas and key striker Paolo Guerrero looked like a player who has been short of match-action.

A fully-fit Guerrero might have made the difference in a tight group but the Incas have been unable to find the net and could be heading for another defeat when they take on Australia in Sochi.