Iran up against classy opponents in St Petersburg 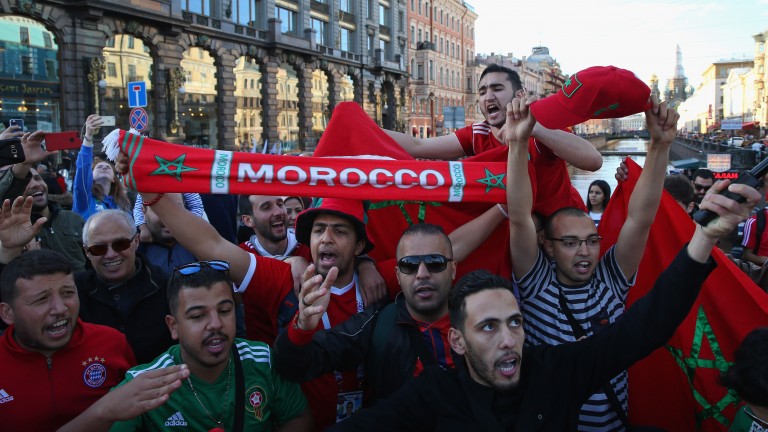 Morocco supporters can get a boost in St Petersburg
Alex Livesey
1 of 1
By Mark Langdon UPDATED 3:19PM, JUN 15 2018

Football fans in Morocco are still down in the dumps after missing out on the right to host the 2026 World Cup but they can receive a timely lift with a win over Iran in their Group B opener.

One look at the goal quotes - both teams to score is 7-5 - highlights the potential for a low-scoring 90 minutes in St Petersburg with both nations knowing that defeat would make it difficult to stage a recovery given the last two fixtures are against Spain and Portugal.

It may take just one goal to settle the issue and Morocco make more appeal given their extra attacking depth, particularly from midfield where they also have interesting options on the bench.

Herve Renard, a two-time winning manager at the Africa Cup of Nations, knows the continent inside out and has solved many of the issues which have made Morocco massive underachievers in African football.

The Atlas Lions qualified in excellent fashion, keeping clean sheets in all six of their group-stage encounters, and that included a double-header with a talented Ivory Coast outfit.

Friendly results can be slightly misleading but Morocco have still had an excellent season in that regard, beating fellow World Cup qualifiers South Korea (3-1) and Serbia (2-1) as well as landing victories over Uzbekistan, Slovakia and Estonia. A 0-0 draw against Ukraine was the only time Renard's side failed to triumph.

A team of home-based players won the domestic African Nations Championship and the top scorer from that tournament, nine-goal Ayoub El Kaabi, is possibly in line for a rapid rise to fame with a World Cup start.

Finding the right forward is Renard's biggest headache because in defence he can rely upon Juventus centre-back Medhi Benatia and their midfield is blessed with technical talents.

The best of those is Hakim Ziyech, the Eredivisie's player of the season after topping the assist and key passes charts.

With Ziyech alongside Younes Belhanda there may even be enough in the squad to steal a qualifying spot for the knockout phase, while Amine Harit from Schalke is another worth watching.

Morocco will need patience and all of that creativity to unlock Iran's watertight defence. They conceded only two goals in ten final Asian qualifiers and both of those came once Team Melli had already secured a spot in Russia.

However, for all that Iran are seen as Asia's best team their preparation has once again been disrupted by non-footballing issues as politics strayed into sport.

Greece and Kosovo cancelled friendlies late on to leave the Iranians fuming and manager Carlos Queiroz was further outraged when Nike refused to supply their sponsored players with boots, leaving some to buy their own on the eve of the tournament.

Sardar Azmoun and the Eredivisie's top goalscorer, Alireza Jahanbakhsh of AZ Alkmaar, offer a counter-attacking threat for Iran yet the absence of suspended midfielder Saeid Ezatolahi is seen as a major blow for such a pivotal contest.

Team news
Morocco
Nabil Dirar, who had been doubtful for the tournament, has returned to training.

Iran
Saeid Ezatolahi will miss the Group B opener through suspension.

Morocco lowdown
Strengths
The midfield will be key for Morocco. Not only is that the department where they possess most quality but coach Herve Renard demands they win the ball back high on the pitch, so expect the engine-room to be busy.

Weaknesses
First-choice keeper Munir has barely played for Numancia this season and possibly should be dropped in favour of Girona's goalie Yassine Nounou.

Key man
Hakim Ziyech's shooting is wayward to say the least but his ability to open up a defence has seen many bigger clubs look at signing the Ajax playmaker.

Iran
Strengths
A hard-running team who are well organised and will defend to the death. They know the game plan and will stick to it.

Weaknesses
Counter-attacking tactics won't work if they fall behind and it's hard to judge their standard because they play so few games against non-Asian teams.

Key man
Alireza Jahanbakhsh is being linked with Brighton. A quick, direct winger, he scored 21 times in the Eredivisie for AZ Alkmaar this season.