Dour Denmark could be vulnerable 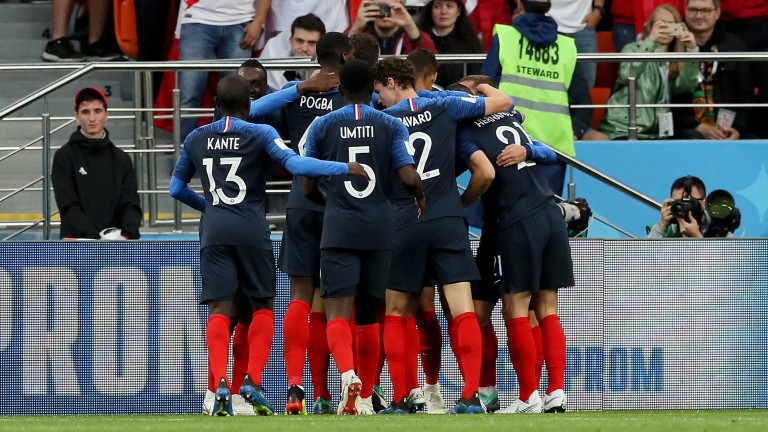 France's attacking stars haven't dazzled yet at the World Cup but gritty wins over Australia (2-1) and Peru (1-0) mean Les Bleus can enjoy a low-pressure Group C finale against Denmark.

Coach Didier Deschamps is expected to test the depth of his squad in the third group game and he is certainly not short of quality forwards to take on the Danes, who need a point to make sure of qualification themselves.

Given the context of the fixture, it's not a game for high-stakes betting but the odds about over 2.5 goals catch the eye.

Bookmakers clearly expect defensive tactics from Denmark as they aim to grind their way through to the last 16 but there is no guarantee they will be able to hold firm against a France side who still have plenty to prove.

Denmark coach Age Hareide declared in May that France were "nothing special" but his own team have hardly set the World Cup alight with a fortunate 1-0 win over Peru and a 1-1 draw with Australia.

The Danes were massively flattered by the result against Peru, who missed a penalty and won the shot count 17-10 but conceded a breakaway goal when Christian Eriksen teed up Yussuf Poulsen.

Hareide admitted that goalkeeper Kasper Schmeichel "had a fantastic performance – and it was needed" against Peru and the Leicester cat may well be kept busy again.

Observers of France's training sessions are expecting a front four of Olivier Giroud, Antoine Griezmann, Ousmane Dembele and Thomas Lemar and Giroud's recall against Peru clearly improved the balance of their attack.

The Chelsea striker loves a battle and provides a perfect foil for the pacy forwards playing off him. His shot was palmed into the path of Kylian Mbappe for the winner against Peru and he also came on as sub against Australia to set up Paul Pogba, whose deflected shot secured a 2-1 win.

France were far from fluent against the dogged Socceroos and had to work hard against Peru but this looks a nice opportunity for them to play with more freedom.

An early goal probably holds the key to the success or failure of an over 2.5 goals bet. If Denmark can keep it tight till 70 minutes or so then there is little need for France to press for the win but if the Danes give up as many chances as they did against Peru they may well be punished.

Chasing the game does not come naturally to Denmark, which would leave them vulnerable on the break to a speedy France side.

At the prices it is worth taking a chance that the Danes don't manage to turn it into a dour draw.

Strengths
A solid defence in front of Kasper Schmeichel and the brilliance of Christian Eriksen, both in open play and from set-pieces.

Weaknesses
Over-reliance on Eriksen for inspiration – he’s scored seven of Denmark’s last 11 goals and set up Poulsen’s winner against Peru.

France
Team news
Didier Deschamps is likely to make several changes to the starting 11 who secured qualification against Peru.

Strengths
Arguably the most talented squad in the tournament in terms of individuals, especially in attacking positions.

Weaknesses
Deschamps is still struggling to find a system that gets the best out of those attacking gems and France’s three goals at the finals include a penalty and an own goal.

Key stat
France have scored at least twice in eight of their last ten internationals.