Harry Kane has Panama in his sights 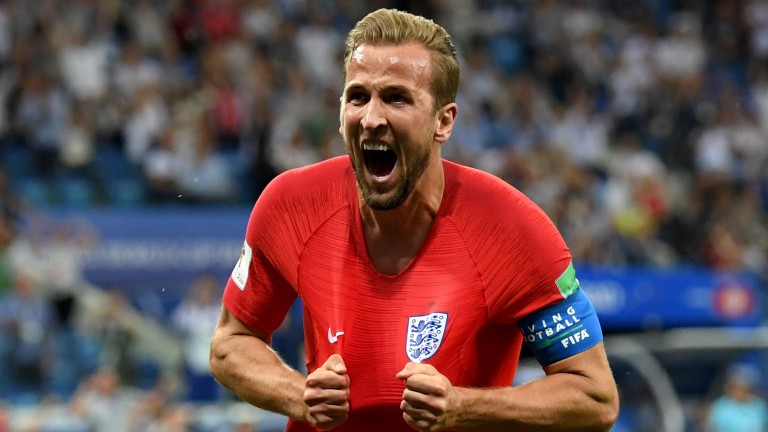 England left it late before overcoming Tunisia 2-1 in their opening World Cup fixture but things should be far more routine against Panama in Nizhny Novgorod.

Bookmakers cannot see anything other than another maximum-point haul for the Three Lions, who are red-hot match favourites and rightly odds-on in other subsidiary markets such as to win to nil and to be leading at half-time and full-time on the double-result market.

The handicap - England are asked to concede 1.5 goals - could be an way of keeping the favourites on your side, but it may pay to bet on 2-0 and 3-0 correct scores with a heavy beating unlikely, even against arguably the weakest team in the competition.

England have never won a major tournament game by more than three goals and in 33 World Cup and European Championship contests this century it has more often than not been a struggle in finals.

Of those 33 games, 13 have been won, 12 have finished in draws (in normal time) and eight have been lost. Nine of the 13 wins were by just one goal with the exceptions being 3-0 victories over Denmark and Switzerland, 4-2 against Croatia and 2-0 against Panama's Concacaf rivals Trinidad & Tobago.

There was a buzz to Gareth Southgate's side early on against Tunisia as they created many opportunities, at least until the African outfit retreated their defensive line and made it more difficult for England's speedy attackers to find space.

For all the enterprising play it needed two set-piece goals to obtain maximum points with Harry Kane continuing his excellent form under Southgate with a double.

The skipper has scored in each of his last four international appearances and has ten goals in his last eight games. Kane goes in search of more glory against Panama, aiming to match Ron Flowers' 1962 effort of scoring in England's opening two World Cup matches.

Kane could have a new partner in Marcus Rashford after the likely line-up was seemingly uncovered by eagle-eyed observers at a training session, much to the annoyance of Southgate, although some who have worked closely with the Manchester United forward believe he is unable to show his best form against opponents in a low, defensive block.

Presumably Panama will defend deep with the idea of frustrating England in much the same manner as they did in Monday's opener against Belgium, who were held goalless in the first half before moments of individual quality saw the Red Devils land a 3-0 victory.

Panama were arguably the most physical side in the opening round of matches, picking up five yellow cards in a tournament where it has been difficult to get booked, but they offered little in the way of attacking intent to suggest Jordan Pickford will be overly troubled.

Hernan Gomez's men scored only nine times in ten games in the final round of Concacaf qualifying and finishing with a negative goal difference highlights Panama's obvious deficiencies.

England
Team news
Dele Alli has returned to training but may not be risked, with Ruben Loftus-Cheek tipped to replace him in midfield. Marcus Rashford could come in for Raheem Sterling.

Strengths
Harry Kane looked sharp in the penalty box against Tunisia and their set-piece delivery was a major weapon in that game. They have pace in the attacking third and are trying to play at a fast tempo.

Weaknesses
There are few players in the squad capable of unlocking a packed defence with smart through-balls. Right-footed left wing-back Ashley Young has to keep checking back on to his preferred foot.

Key man
Kane was poor at Euro 2016 but should gain confidence from his opening two-goal salvo. He is thriving as the Three Lions captain and he has scored 48 goals in 54 matches for club and country this term.

Panama
Team news
Panama have confirmed they will play the same 11 which started against Belgium.

Strengths
Their strength is one of their main strengths and Belgium struggled at times with Panama's physicality. Hernan Gomez's side know their limitations and are likely to protect themselves from a thrashing.

Weaknesses
The constant fouling brings yellow cards and free kicks in dangerous positions. Gomez was criticised for his substitutions against Belgium and his ageing side could once again tire in the latter stages.

Key man
Yoel Barcenas, one of those upset to be taken off on Monday, did provide the odd moment of danger. Barcenas was pictured in tears in training this week after a motivating talk from boss Gomez.