England may be forced to go the distance by Colombia

Three Lions could go through after extra-time 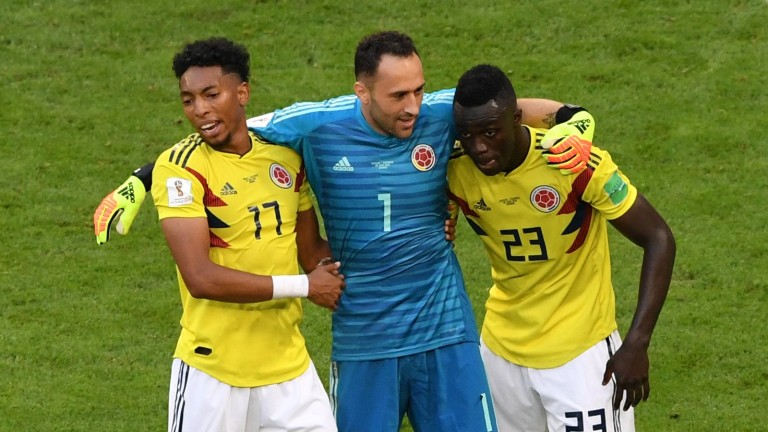 Colombia could be tough opponents for England in Moscow
Stu Forster
1 of 1
By Mark Langdon UPDATED 8:37PM, JUL 2 2018

England have landed in the easier part of the knockout draw but before they start thinking about a possible plum quarter-final and a potential soft semi there is the small matter of heading to the Spartak Stadium for a last-16 date with Colombia.

It will be Gareth Southgate's side first proper test of the World Cup and his first proper examination at senior international level per se after a serene qualification campaign was followed by friendly matches and a couple of comfortable opening fixtures in Russia.

Many are convinced "it's coming home" but few seem to comprehend that may change to "they're coming home" after a tricky test against a South American side who have the potential to take this at least to extra-time.

Should it go beyond regulation time it may well be advantage England, who may have greater energy levels after Southgate wisely rested players for the 1-0 defeat to Belgium, while the 6-1 Panama stroll was over long before half-time.

Essentially, Southgate's side have played one-and-a-half matches at this World Cup whereas Colombia had to endure 85 minutes with ten men against Japan and then had to play catch-up in the group battle to overcome Poland 3-0 and Senegal 1-0.

That was a hard slog for Jose Pekerman's outfit and may lend itself to a smaller bet on England's youthful squad finishing the job between 90 minutes and penalties as well as a punt on the draw.

England are difficult to weigh up which makes it precarious to back them to win in normal time.

What have they beaten so far? Harry Kane's double just about saw off Tunisia in a 2-1 victory but the north African side were hammered 5-2 by Belgium and Panama exited their debut campaign pointless.

Still, England left a decent impression against Tunisia with Dele Alli and Jesse Lingard making excellent runs beyond Kane and the delivery from Kieran Trippier has earned comparisons with David Beckham.

It was a positive performance, which continued against Panama, but Colombia's 3-0 pummelling of Poland was one of the highlights of the tournament.

Impossible to judge against Japan, they then muddied the waters with a far less impressive showing despite beating Senegal with giant centre-back Yerry Mina scoring his second goal of the finals.

Colombia are desperately hoping star man James Rodriguez is fit after an injury scare, but Juan Quintero, Juan Cuadrado and Radamel Falcao will still make this an intriguing tie even if the talisman is unable to feature in a tie which will leave the winners dreaming of going all the way.

One of Russia, Croatia, Switzerland, Sweden, England or Colombia are guaranteed to be in the World Cup final but if it is to be the Three Lions they could put their supporters through the wringer in Moscow.

England are on the easier side of the draw but that does not mean it will be easy.

Colombia
Team news
James Rodriguez is a major doubt and was not in a practice team used by Jose Pekerman in his final training session before flying to Moscow from their base in Kazan.

Strengths
Tall centre-back Yerry Mina is dangerous in the air. Juan Cuadrado offers thrust, Juan Quintero sees a pass and Radamel Falcao is lethal in the box. The doubtful James Rodriguez is special when on song.

Weaknesses
None of the other forward players are quite so dangerous without Rodriguez and even if he features there is a question mark over his fitness having started only one of the three group-stage games.

Key man
Quintero has been Colombia's best player and the silky playmaker seems to have rediscovered his love for the game after nearly quitting to become a rapper following a miserable spell in European football.

England
Team news
Fabian Delph has been back in England with his heavily pregnant wife. Dele Alli has recovered from a minor problem and should start.

Strengths
Great pace in the attacking third and one of the world's best goalscorers in Harry Kane. England's set-pieces have been excellent and, including penalties, been a source of six of their eight goals.

Weaknesses
Not many players in the side can cut through a team with through-ball passes and the defence has barely been tested in the World Cup yet still conceded to Tunisia, Panama and Belgium's B team.

Key man
They have not been the prettiest but Kane has scored five World Cup goals and has his eyes firmly set on the Golden Boot. He faces an intriguing battle against speedy club teammate Davinson Sanchez.

Key stat
England have won two of their last 15 knockout matches in normal time at major tournaments since beating Paraguay 3-0 in 1986.

Weather
Partly cloudy and down to around 16C.