World Cup 2022 predictions: Our experts look ahead to next year's Qatar event

France and Spain well placed to make up for Euro disappointments 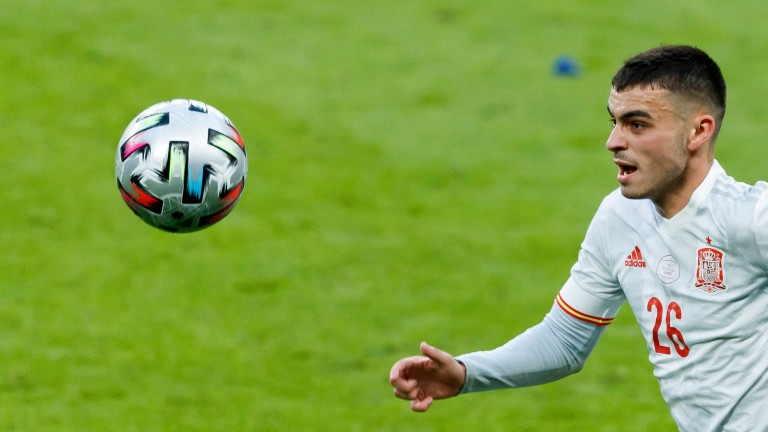 Spain youngster Pedri has a big future ahead of him on the international stage
TF-Images
1 of 1
By Racing Post Sport UPDATED 11:45AM, JUL 20 2021

We asked our team of football experts who they fancy to win the World Cup in Qatar next year and this is how they answered...

A positive showing from Spain should be expected. La Roja were written off by many heading into Euro 2020 but they showed great resolve to reach the semi-finals and they have some young talents who are going to be much better for the experience.

Barcelona’s pass-master Pedri, who is only 18 years of age, has something special while Eric Garcia (20), Dano Olmo (23), Ferran Torres (21) and Ansu Fati (18) are fellow rising stars.

The missing piece of the jigsaw would be a clinical finisher, but their midfield depth is a real asset and if they carve out goalscoring chances at the rate they did this summer, then they are going to be a danger to all.

Dan Childs
France's exit from Euro 2020 was a major surprise but it may have been more to do with complacency than a lack of quality and I can see them coming back strongly over the next 17 months.

Only six of France's outfield players selected for Euro 2020 were over the age of 30 and key attacker Kylian Mbappe will be highly motivated after failing to hit the heights this summer.

England should go close as they are a team with scope for further improvement and I envisage a strong showing from Spain, who will have taken huge confidence from their Euro 2020 semi-final performance against Italy.

Liam Flin
France should be in a much better position next year with star forward Kylian Mbappe's future presumably resolved by then and the way they exited Euro 2020 against Switzerland on penalties was unfortunate.

They can still boast arguably the deepest squad and will be determined to make amends for this year, while it is also hard to ignore England given their defensive resolve and youthful squad as well as a top manager in Gareth Southgate.

An outside shout, however, could be the Netherlands. The Dutch crashed out against Czech Republic at Euro 2020 but by the end of next year they could have a strong spine with Matthijs de Ligt, Ryan Gravenberch and Donyell Malen all exciting talents. Virgil van Dijk could also be back along with a better manager than Frank de Boer.

Keep faith in France, who produced some stunning bursts of football at Euro 2020 despite only reaching the last 16.

Didier Deschamps' plans were disrupted by defensive injuries that forced him into a reshuffle against Switzerland but Karim Benzema made a triumphant return to international football and the world champions should not relinquish their crown without a fight.

Spain and England look the most progressive contenders other than France and, much further down the betting, the USA could go well.

An exciting generation of young Americans includes Chelsea's Christian Pulisic, Borussia Dortmund's Giovanni Reyna, Barcelona's Sergino Dest, Leipzig's Tyler Adams and Weston McKennie of Juventus and, while the 2026 World Cup on home soil is a more realistic target, they could be worth a small each-way bet at 100-1 or bigger.

Henry Hardwicke
France will still have plenty of quality in their squad, but it was an extremely disappointing effort at Euro 2020 and that's hard to forgive. Spain will be popular, but I'm not sure they'll have an answer to their goalscoring issues and England may be best placed for another deep run.

History tells you that international football is open to domination as Spain showed when winning three major tournaments between 2008 and 2012 and France were beaten in the final of Euro 2016 before going one better and winning the World Cup in 2018.

The Three Lions have a young squad, who may still have some progression in them and won't be broken up by retirements.

With England and Spain bringing two of the youngest squads to Euro 2020, there’s plenty of scope for improvement from those nations. The Three Lions have overcome several mental hurdles at the European Championships that will stand them in good stead going forward, while La Roja have given glimpses of a bright future.

Unlike England with Harry Kane though, Spain will need to find a consistent goalscorer if they are to be serious contenders.

Ultimately, they will all have to overcome reigning champions France, who will no doubt be smarting from the manner of their Euros exit. Les Bleus are blessed with a squad still in its prime and packed full of talent and could go back-to-back.

Ian Wilkerson
Both Italy and England demonstrated the value of the squad, rather than individual superstars, on their way to the Euro 2020 final, and I'd put faith in the Three Lions having an excellent World Cup.

Gareth Southgate appears to have mastered tournament management. Everyone remained involved and whenever he switched personnel, the man coming in was always so suited to the task that any change was seamless.

He has top operators playing for top managers and their strong fitness levels were demonstrated in extra-time of the Denmark game when they got stronger while their opponents were spent.

A lack of travel may have had plenty to do with that, but endurance is going to be a massive asset in Qatar and they can go all the way.