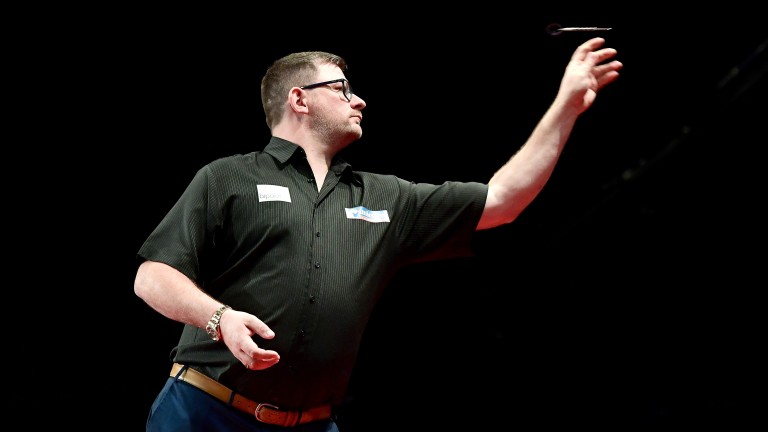 James Wade and Jamie Hughes are the top-32 players making their bow at the William Hill World Darts Championship on Friday and neither man has a bye into round three.

Number seven seed Wade presumed he'd be playing Callan Rydz and the young Geordie impressed in a 3-1 triumph over James Bailey. He'll be no pushover and nor will Hughes's opponent Adam Hunt, who will feel so much better for fending off Lisa Ashton's fantastic challenge in their opener.

One player who will be absolutely thrilled that Alexandra Palace is fan-free for these championships is Mickey Mansell – although the Northern Irishman is still worth taking on against Kiwi dangerman Haupai Puha.

Mansell has endured five previous visits to the Palace and four of those have ended in whitewashes. The one time he won a set was two years ago in a dismal 3-1 loss to Jim Long.

He isn't the worst floor player and clearly doesn't fancy crowds but that record at Ally Pally is desperately hard to ignore, especially as Puha is no mug.

A World Cup regular, Hopes finished second in the averages in the truncated DPA campaign (second to Kyle Anderson) and is a solid thrower. Solid could well be enough, and he's certainly the value of the two.

Wayne Jones is some way from the player who reached the world semis 15 years ago.

Now 55, The Wanderer has had a fairly unproductive autumn and winter winning just five matches in ten tournaments – hardly confidence-inspiring before a showdown with talented youngster Ciaran Teehan.

Indeed, Jones hasn't actually won a match at the Palace in a decade, an accusation that can't be levelled at Teehan.

The kid from Cork whitewashed Ross Smith on his debut 12 months ago before being pipped in a tight one against Mervyn King.

Teehan won through qualifying to get here – averaging 98-plus in wins over Michael Barnard, Mark McGeeney and Joe Murnan – and looks worth the punt.

Callan Rydz has looked like a player who means business over the past few months and he definitely has the game to trouble seventh seed James Wade.

Rydz has had a trial run for the game – the young Geordie beat James Bailey 3-1 in round one on Wednesday – where he averaged an eminently respectable 93.5.

But that shouldn't have surprised anyone given his recent form. He enjoyed a fantastic Winter Series on the tour where a win over Michael van Gerwen and a semi-final appearance were the highlights, and then beat Daryl Gurney and Ryan Searle to make the last 16 of the Players Championship Finals.

Wade reached the Grand Slam final to demonstrate he still possesses a big-occasion game but this one could be tight. Each man was averaging in the 95s on the Pro Tour so backing the outsider on the handicap adds up.