Woodland can yield crop of birdies 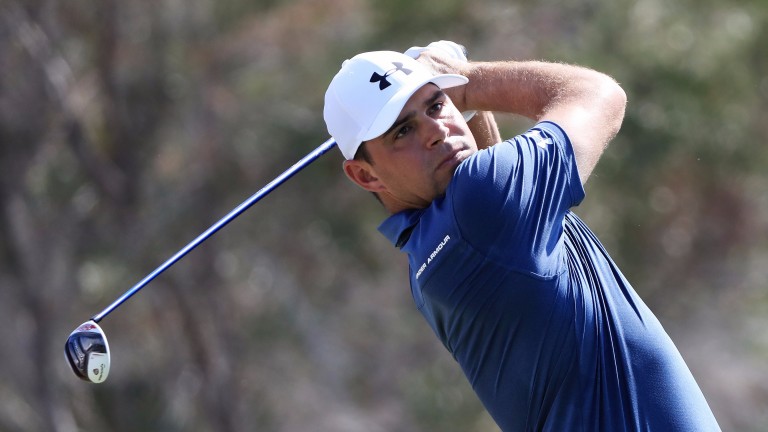 Palmer's top tip
Gary Woodland 40-1
Tiger Woods will dominate coverage of the Farmers Insurance Open, the living legend attempting to revive his career at a happy hunting ground where he has triumphed eight times, but Gary Woodland could be the centre of attention come Sunday.

Woodland started the year bursting with confidence, close-season work with Butch Harmon fine-tuning an ever-improving swing which looked in mint condition during the FedEx Cup playoffs.

The powerhouse had form figures of 4-15-24-10 through the playoffs, then signed off for 2016 with second place in the OHL Classic at Mayakoba.

One outing this year has yielded sixth place in the Sony Open, where Woodland was thrilled with the state of his game. His effortless length will come in handy at a long, drenched Torrey Pines, and his controlled fade off the tee should allow the Kansas man to avoid the juicy rough.

Woodland has played well at Torrey Pines the last four years (27-10-45-18) and the changes to the North course can only help him. Only two US Tour titles at the age of 32 is a poor return for a man blessed with so much ability, but maybe married life will provide peace of mind and more steel in contention. He tied the knot in October.

Woodland has threatened to win in California before. He was a playoff loser in the 2011 Bob Hope Classic and runner-up to Rory McIlroy in the 2015 WGC-Cadillac Match Play.

Dustin Johnson and Rickie Fowler are probably jaded after trekking from Abu Dhabi, while Phil Mickelson is working his way back from injury, so Woodland could prove the leading American hope.

Next best
Harris English 100-1
The heroic maiden success of his best friend, Hudson Swafford, seems sure to act as inspiration for an underachieving Harris English. Swafford finished the CareerBuilder Challenge in glorious fashion on Sunday to make his breakthrough, leaving him only one win behind English.

The frustration of being stuck on two titles may have been a spur for English to change his equipment in the close-season. Both his victories came in 2013 – when he used PING clubs – and that is the company to which he has just returned.

English is better than Swafford and will be keen to prove it this week. English has missed three cuts in a row by a single shot, an infuriating spell which followed fourth place in the Shriners Open at the start of November. The 27-year-old can get back on the front foot at Torrey Pines, where he was a playoff loser to Jason Day in 2015.

Other selections
Tony Finau 66-1
Emiliano Grillo 66-1
Michael Kim 200-1
Patrick Rodgers 175-1
Power is of great advantage this week, with soft fairways lined with heavy rough that only those who possess plenty of muscle can make much progress from.

Woodland and Tony Finau, two of the longest drivers in the sport, have shown in Major competition that they can handle long, tough courses like Torrey Pines South.

Finau has finished 24th and 18th in two previous Farmers starts and his Web.com Tour victory, the 2014 Stonebrae Classic, came in California. A tidy Hawaii Swing – ninth at Kapalua, 20th at Waialae – has warmed the Puerto Rico Open champion up nicely for Torrey.

Emiliano Grillo won the 2009 Junior World Championship by four shots at Torrey Pines when he was 16. The Argentinian has developed into one of the most solid tee-to-green operators on the planet and his maiden US Tour victory came in California at the end of 2015 (Frys.com Open).

With rust shed from his system in the CareerBuilder last week, expect the world number 25 to put his name back on the leaderboard at Torrey.

Complete a six-pronged attack for an event where six or seven each-way places are available with some firms.

Michael Kim and Patrick Rodgers are two maidens with local connections who could cause an upset.

Kim grew up about ten minutes from Torrey Pines and went to Torrey Pines High School. His immense bank of course knowledge helped him lurk just two shots off the pace after 54 holes of last year's Farmers, before a final-round 83 in terrible weather dropped the US Tour rookie to 31st.

The 23-year-old has established himself on Tour since, his best finish coming in California – third spot at the Safeway Open in October. A bright start to 2017 makes Kim a home-state dangerman.

Rodgers was a superstar at Stanford University and knows Torrey Pines well from his college days. The 24-year-old possesses the power and long-game quality to handle a soggy South.

He closed 2016 with tenth place in the RSM Classic and a missed cut by a shot in the Sony Open on his seasonal reappearance is nothing to fret about.

Rodgers has been waxing lyrical about his new Callaway equipment and is worth chancing at a fancy price. It surely will not be long before potential is converted to achievement.

Others to note
Jason Day
The world number one revealed a shortened back-swing in 2017 opener at Kapalua and may need more time to settle. Won the Farmers in 2015 and was second in 2014.

Hideki Matsuyama
The pre-Christmas form-horse was runner-up to Justin Thomas at Kapalua. Has missed the cut in the last two Farmers renewals.

Brooks Koepka
Big-hitting Floridian ended last year strongly and looks set for a successful campaign, but he has never excelled in California.

Brandt Snedeker
The former FedEx Cup champion loves putting on Poa annua greens and half of his eight US Tour victories have come in California, including two Farmers triumphs.

JB Holmes
Powerhouse should relish the conditions at a venue where he was a playoff loser in 2015. Played superbly in some prestigious events last year without winning.

Charles Howell
Chucky continues to churn out excellent results without threatening silverware. A top-15 finisher in his last five starts. Has twice finished second in this event.

Course overview Formerly the Buick Invitational, this tournament has been played at Torrey Pines since 1968. The South, opened in 1957, was redesigned and toughened by Rees Jones in 2001 to make it worthy of staging the 2008 US Open, which was won by Tiger Woods in a Monday playoff against Rocco Mediate.

It is a severe test, especially when the wind blows in from the Pacific Ocean, and has traditionally been at least two shots harder than the North in this event.

The North was 646 yards shorter, but Tom Weiskopf has conducted a $12m redesign since the last tournament and lengthened the North by 206 yards. The fairways have been slightly widened, the greens enlarged and the nines reversed. The greens are bentgrass at the North and Poa annua at the South.

The North is used for only one round (the final 36 holes are played at the South once the cut has been made). The small Bentgrass greens on the South are undulating, tricky, and not usually in the best of shape at this time of year. A series of recent storms in the area means the rough is thick and juicy.

Both tracks finish with a par-five. Of the eight fives played during the week, the ninth at the South, at 613 yards, is the longest and most challenging.

Story of last year Brandt Snedeker produced one of the rounds of the season, defying brutal weather to fire a final-round 69, which set a clubhouse mark of six under par that nobody could match

Weather forecast A wet winter has soaked Torrey Pines and allowed the rough to grow. Sunny and calm for the tournament days

Type of player suited to challenge The honours board at Torrey Pines indicates this venue is a big-hitters' paradise, with Tiger Woods having won eight times, Phil Mickelson thrice, and further triumphs for John Daly, Davis Love, Nick Watney, Bubba Watson, Scott Stallings and Jason Day. Kyle Stanley should have joined the club in 2012 before his final-hole horrors. The South, on which 54 holes will be played, is a long, brutal track which can overwhelm powder-puff drivers. Ben Crane and Brandt Snedeker have shown in recent years that exceptional putters can overcome length deficiencies at Torrey, but it is a brave punter who goes to war this week without a few powerhouses on their side, particularly with rain-sodden fairways and the extensions made to the North