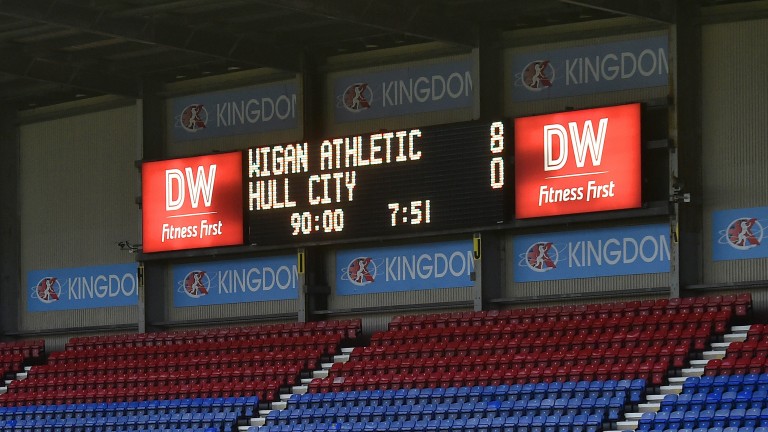 Whatever your preferred noun for a wide-margin victory – a trouncing, a hiding, a thrashing or a walloping – Wigan's 8-0 Sky Bet Championship win over Hull City on Tuesday was a classic of the genre.

For a start, it didn't leap off the fixture list as a potential eight-niller. So few drubbings come as a genuine surprise – Manchester City beat Watford 8-0 in the Premier League in September, for example, but they had hit them for six in the FA Cup final only a few months earlier.

Ipswich finished bottom of the top flight the season they conceded nine to Alex Ferguson's Manchester United while Germany's 13-0 win over San Marino in a Euro 2008 qualifier was probably regarded as a par score by Die Mannschaft.

Leicester's 9-0 romp at Southampton in October was certainly a special result although it loses a little of its sparkle because Saints defender Ryan Bertrand was sent off in the 12th minute.

In terms of pure, glorious, cathartic routs, though, the Wigan whipping is right up there with Germany's 7-1 win over Brazil in that astonishing 2014 World Cup semi-final in Belo Horizonte.

There may have been a slightly less fervent atmosphere for Tuesday's second-division 6pm kick-off at an empty DW Stadium but Wigan's first-half display eclipsed even Germany's inspired effort.

While Joachim Low's men scored five times in the first 29 minutes, the Latics – clearly wary that 5-0 is the most dangerous lead in football – left absolutely nothing to chance with seven unanswered goals before the break.

The Wigan-Hull half-time scoreline provoked a deluge of rugby-league gags on social media and also raised the question of exactly how many drinks breaks the Tigers had enjoyed in the first 45 minutes.

While in-play shrewdies scrambled to snap up the best prices on under 7.5 and under 8.5 goals, the pathos of Wigan's precarious off-field situation made it a shellacking to savour for supporters of any club other than hapless Hull.

Wigan boss Paul Cook described the club's shock descent into administration as "the worst, toughest week of my career by far" so who could begrudge him a pressure-free second half in which Kieran Dowell completed the scoring (and his hat-trick) in the 65th minute?

The Latics were happy to declare their innings at that point, and why not?

In the unforgiving world of professional football you don't often get the chance to take a deep breath, knock the ball around at the back, and think to yourself: "We're winning by 8 (Eight) here, lads ..."