Norway next for England in the France 2019 quarter-finals 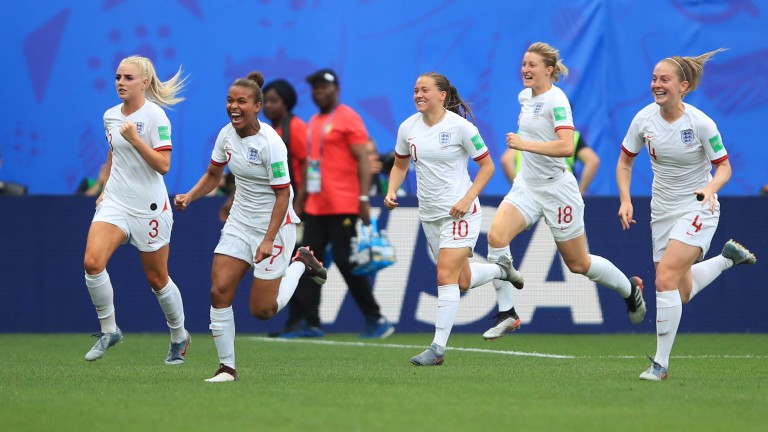 England's women are through to the World Cup quarter-finals after a 3-0 success over Cameroon in a dramatic match where at one stage the African side refused to restart the game following a VAR decision.

The controversial episode came just before half-time when Cameroon were in uproar after Ellen White's goal was correctly given by VAR following an erroneous offside flag.

That doubled England's advantage after Steph Houghton's free-kick opener, given when a backpass to the goalkeeper was picked up by Annette Ngo Ndom.

Cameroon were further outraged early in the second half when they had a goal disallowed by VAR for a marginal offside call and England took advantage of their reprieve as Alex Greenwood finished off a clever set-piece routine.

This was never supposed to be a difficult tie - England had been 1-6 to win - and they will need to improve for their quarter-final against Norway, who upset Australia on penalties to reach the last eight.

England will be favourites against Norway in Le Havre on Thursday night.

The Scandinavians travelled to France without the world's best female player, Lyon's Ada Hegerberg, who refuses to represent her country due to an ongoing disagreement with the football federation.

Norway beat Nigeria 3-0 and South Korea 2-1 in the group stage and they were controversially beaten 2-1 by hosts France.