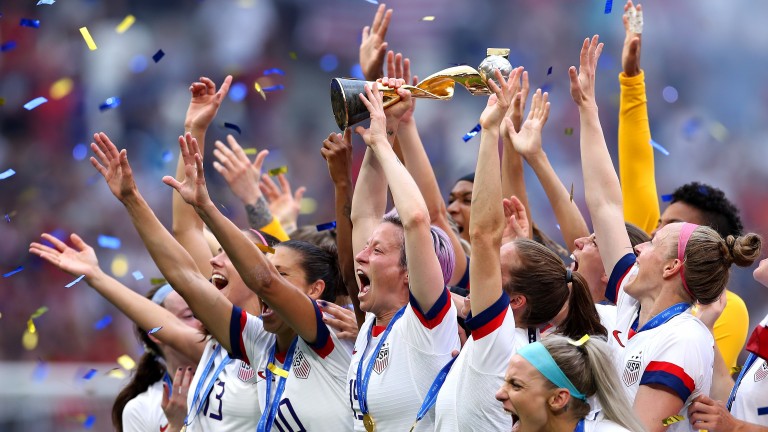 No team in international football have enjoyed quite as much success as the US Women’s Soccer Team recently and they are on the warpath again as they chase a fifth Olympic title in Tokyo.

Team USA have more in common with gold than the traditional red, white and blue of Old Glory having won their fourth world title in 2019, followed by a fourth SheBelieves Cup in February.

Riding a 44-game unbeaten into the Games, the USA are 4-7 favourites to snatch the top prize having won gold in four of the six previous Olympic tournaments.

Unlike the men's event, there are no age restrictions imposed on the women when it comes to squad selection, meaning USA coach Vlatko Andonovski has been able to name a 22-strong party featuring some of the world’s top stars.

Kirstie Mews is the only member of the squad who can’t call herself a World Cup winner with Andonovski putting his faith in experience. Carli Lloyd, who will turn 39 before the Olympics, will be playing at her fourth Games, while Becky Sauerbrunn, Kelley O’Hara, Alex Morgan and Megan Rapinoe are at their third tournament.

There are few weaknesses in this US side, who have kept clean sheets in 25 of their last 29 games, while you have to go back to 2017 for the last time they failed to score in a match.

Reigning Olympic champions Germany and France failed to qualify for the Games, so the current European champions and World Cup runners-up the Netherlands look the biggest threat to the USWNT.

The Dutch have a balanced squad with Arsenal goal machine Vivianne Miedema leading the way and have the luxury of having been placed in the weakest group, alongside Brazil, China and Zambia.

The Oranje Lionesses will expect to go deep into the tournament but a few questionable results in the build-up to the Games, including defeats to Spain and Italy, have cast doubts over the credentials of Sarina Wiegman’s women.

Wiegman will leave the Dutch after the tournament to become England boss and could face some of her future charges in the knockout stages under the guise of Team GB.

The Brits squad features 19 English players, two Scots and one Welsh player with some familiar faces in Ellen White and Steph Houghton amongst their ranks.

A place in the knockout stages is the minimum expected from Great Britain but they will have to work for a quarter-final berth and may have to play second fiddle to Canada in Group E.

The Canadians dumped Britain out of the Olympics in 2012 and have a good track record at the Games, scooping back-to-back bronze medals.

In a competitive group also featuring hosts Japan and debutants Chile, Canada have enough to steal top spot ahead of a Japanese side playing with a lot of pressure on their shoulders and Team GB.

FIRST PUBLISHED 3:15PM, JUL 19 2021
The Team USA has more in common with gold than the traditional red, white and blue of Old Glory having won their fourth world title in 2019