Newcastle can earn a point against struggling Wolves 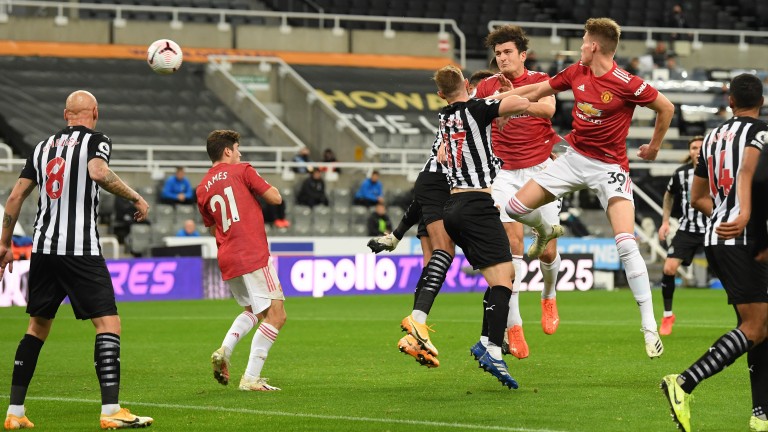 Newcastle struggled against Manchester United
Stu Forster
1 of 1
By Steve Davies 10:25AM, OCT 24 2020

Newcastle
Isaac Hayden (hamstring) and keeper Karl Darlow are doubts. Martin Dubravka is still out so Mark Gillespie is on stand-by.

The last three Premier League duels between Wolves and Newcastle have ended in 1-1 draws and something just as close is in the offing when they meet at Molineux on Sunday.

Odds of 4-6 about under 2.5 goals is a real rarity in this zaniest of starts to the campaign but it adequately illustrates that these aren't sides with copious amounts of firepower.

Wolves rode their luck at Leeds on Monday, delivering a scruffy 1-0 win which took them into the top six, yet they have got there having scored just five times in five games.

Newcastle have scored seven. They are in the bottom half of a Premier League shots-per-game table (Wolves are averaging 10.6, Newcastle 8.8) and however you dress this match up, the likelihood is for something short of goalmouth action and low-scoring.

A fourth consecutive 1-1 scoreline between the teams is a 6-1 shot but the draw at 5-2 is preferred.

There is no doubt that Wolves are struggling. It's all relative, but they aren't playing with anything like the panache and the style of last season.

On the plus side, Raul Jimenez just can't seem to stop scoring and they are able to stop sides playing. That 4-0 hiding at West Ham hurt but they have chalked up a trio of low-scoring wins to nil against Sheffield United, Fulham and Leeds.

They haven't strengthened and will do well to be challenging the top six as they have done in each of the last two campaigns.

Newcastle will fancy they can get something from this assignment, especially the way they play, absorbing pressure and looking to launch Allan Saint-Maximin on the counter. If it happens, incidentally, Saint-Maximin versus Semedo could be interesting because the ex-Barcelona man is yet to find his feet.

The Toon have lost only two of their last ten away matches and it may not be worth over-analysing last week's pitiful performance against Manchester United.

The Geordies have a blind spot against the big boys and simply vanished into their shell. The Manchester goals in that 4-1 loss came late, but the visitors had already had a goal disallowed and missed a penalty and they were miles better than Steve Bruce's side.

But when they roll up their sleeves against lesser lights they tend to be far more competitive and Jamaal Lascelles and his teammates owe their manager a performance.

Wolves have scored 40 of their last 56 goals after half-time.